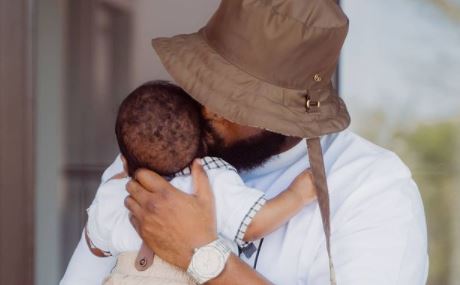 THE negative side of social media made rapper Cassper Nyovest and his baby mama Thobeka Majozi super-sceptical about sharing their son’s images on the net, but on Thursday Cassper couldn’t help but share a glimpse of his boy.

Cassper took to Instagram to post the first snap of his son in which a big part of his face is visible.

Even though Kgotso wasn’t posing or looking at the camera, Cassper’s fans could see for the first time how cute the six-month-old is.

In the snap, Kgotso is wearing nothing but his nappy and a yellow bucket hat. That was enough for Cassper’s comment section to be filled with “awwws” and “oh how cute!” messages in minutes.

Kgotso is the rapper’s first born and his parents’ spoil him with the very best.

Recently his mommy Thobeka flexed with a picture of them slaying in Versace sleepsuits.

“Some people were just born with style, ithina labo’ some people,” she captioned her snap.

In September last year, at the time of his birth, both Cassper and Thobeka revealed they planned to keep their son out of the spotlight and away from the “real life witches” on social media.

Cassper, who has been fiercely protective of Thobeka and his son, told his followers he would prefer to keep his family private.

“Prayer has been my weapon! That’s why I won’t post my child on these platforms. Besides the millions whot love us and want to share with us, we are also among real life witches and they prey on moments like these or people like us,” he said.