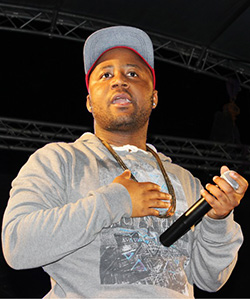 SOUTH African hip hop artist, Cassper Nyovest, has responded to calls from Zimbabweans calling for a boycott of his upcoming show in Bulawayo, promising his fans that the show will go ahead.
Nyovest real name Refiloe Phoolo is slated to perform at Hartsfield Rugby Ground alongside Djembe Monks, Cal_vin, Winky D and Judgement Yard.
Zimbabweans, including musicians like Sandra Ndebele, have rallied people to boycott musical shows featuring South African acts, including the much hyped Cassper Nyovest gig.
The multiple award winning musician will be performing for the first time in Bulawayo, since gaining instant popularity with his smash hit, Doc Shebeleza.
Kwaito outfit, Big Nuz are also slated to perform in Bulawayo this weekend.
In a bid to make sure the targeted South African artists got the message loud and clear, Zimbabweans bombarded them with messages on their social media messages urging them not to turn up for their shows.
One of the messages read: “Dear Cassper Nyovest tell your people to stop Xenophobia or you’re not welcome, Yours Zimbabwe.”

Responding on his official Facebook account,  Cassper Nyovest wrote: “This is making its rounds on social media in Zimbabwe and people are advising me to cancel my show in Bulawayo next week and I am not budging.
“I do not support xenophobia therefore my show in Zimbabwe is still on for the 25th of April. My Zimbabwean fans are gonna come to my show.
“We are one AFRICA therefore we will dance together. I will come perform for my brothers. Thank you.”
Another South African artist who has been affected by the xenophobic attacks is song bird, Kelly Khumalo, whose United Kingdom show has been put on ice until the current mayhem in her home country is resolved.
“Elite Promotions hereby announce that we are postponing the Kelly Khumalo UK show until further notice in solidarity with the innocent victims of Xenophobia in South Africa,” said the organisers.
“How can we entertain ourselves when we are in mourning for our Brothers, Sisters and children murdered so mindlessly?
“We would also like to apologise to the people who purchased advance tickets to this hugely supported tour about the postponement.Advertisement

“They will all be refunded fully and should contact tickets outlets they bought ticket from to collect their refunds.”
Cassper Nyovest Ft. DJ Drama & Anatii – Ghetto