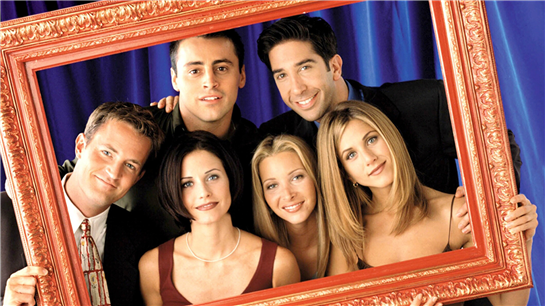 The cast of Friends will reunite for a two-hour special, US broadcaster NBC has said.
Jennifer Aniston, Courteney Cox, Lisa Kudrow, Matt LeBlanc, Matthew Perry and David Schwimmer are on board for the special which will be broadcast as a tribute to director James Burrows.
Efforts to bring all six cast members together on television have proved difficult in the past, and that appears to still be the case.
NBC entertainment chairman Robert Greenblatt suggested the reunion may not feature the six actors together.
“I’m hoping all six will be in same room at the same time,” he told reporters at the Television Critics Association winter press tour in Los Angeles.
“I’m not sure we can logistically can pull it off,” Greenblatt admitted.
Burrows, who has just celebrated directing his 1,000th programme, helmed numerous episodes of the popular series about a group of friends living in New York City.
Multi award-winning Friends premiered in 1994 and ran for 10 seasons. It made its cast of little-known actors international stars, with pay packets to match.
Since the series finale in 2004, there have been frequent reports and rumours of a reunion.
Burrows was also behind the camera for several of America’s much-loved sitcoms including Cheers, Frasier and The Bob Newhart Show.
The two-hour show is expected to feature cameos, sketches and appearances connected to the various series the 75-year-old has worked on over the years.
However, the buzz and excitement about this announcement has been sparked by the news of the Friends reunion.
The special is scheduled to be broadcast on February 21 on NBC.Advertisement