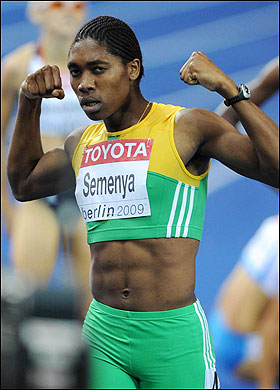 CASTER Semenya: you may remember the name.
Perhaps you also recall the chaos, confusion and controversy that descended on an athlete who just wanted to run.
It is difficult to link the engaging 24-year-old who has granted the BBC a rare interview with the haunted athlete whose gender was questioned in front of the world.
Six years have passed since she won the world 800m title with effortless, inevitable ease. Semenya’s victory was as decisive as what followed was shocking.
“If it wasn’t for my family, I don’t think I could have survived,” she says, when recalling the incident that saw her forced to undergo a series of gender verification tests, news of which was made public by athletics’ governing body, the IAAF.
“I was world champion but I was never able to celebrate it. It was a joke for me. When I grew up, I grew up like that. I grew up with boys, I grew up around boys, I cannot change it.
“It was upsetting, you feel humiliated. You cannot control what people think. It is about yourself, controlling yourself – what is in you. But now I want to focus more on the future, I don’t want to go back there. What is done, is done.”
New beginnings
We meet in the town she now calls home. Semenya is rebuilding her career here, as well as her life.
She is, quite visibly, an athlete at peace with a new coach, a new training group and a new hairstyle. She is also noticeably slimmer than the athlete we remember.
“It is paradise here, I am happy. The hairstyle stands for new things.”
Potchefstroom, a quite university an hour and a half from Johannesburg, has rarely been described as paradise, even by its most partisan resident.
For Semenya, though, it marks a new beginning. A place of privacy and hope for what lies ahead.
“I’ve always liked to be on my own, since I was young. I like the sound of a quiet place. It helps me focus. I do well. And the group here is great.”
The training group she refers to is coached by the impressive and highly regarded South African Jean Verster.
Nijel Amos, Commonwealth 800m champion and David Rudisha’s great rival, trains here, as does Andre Oliver, the South African who won bronze in the same event in Glasgow.
Britain’s double world and Olympic 400m champion Christine Ohuruogu joined the group last winter. There is a tangible buzz.Advertisement

Semenya combines training with a sports science degree at the town’s North West University.
“There is nothing much to do here – eat, train, sleep, study,” she says with a smile.
‘I just want to be me’
Our first sighting of Semenya had come two days earlier, as she warmed up for the SA Open Championships.
On a warm afternoon at her home track, she was swamped by fans, who laughed and screamed with joy when they were able to lay even a fingertip on her as she jogged towards the warm-up track.
This is Caster Semenya as the world has rarely seen her before – an idol to millions of young South Africans; an athlete whose status and reach extends far beyond the track.
“When I am in that lane and I hear ‘Caster Semenya from South Africa’, I always know I am doing it for my people,” she says.
“They love and support me and I will always do them proud, I will always put them first. Without them, I am nothing.”
Two days and two exams later, we meet again under a willow tree by the grass track she trains on.
We discuss her love of Manchester United as well as her passion for watching golf, rugby and Formula 1.
A silver chain with a cross hangs from her neck and the late-afternoon sun glints off her earrings. That familiar smile is ever present.
So who is the real Caster?
“A very humble athlete, very strong, easy to talk to. Sometimes maybe a little bit arrogant,” she says. “I am a very easy person.”
And does she think the public perception tallies with that description?
“I think they understand me, as I am. I am not a fake. I am natural. I am just being Caster. I don’t want to be someone I don’t want to be.
“I don’t want to be someone people want to me to be. I just want to be me. I was born like this. I don’t want any changes.”

‘They couldn’t have stopped me’
For the past two years, Semenya’s career has stalled. A dislocated knee was one problem. An absent coach, in the shape of the great Maria Mutola – a childhood hero, was another.
Now it is time to return to the spotlight and to the world stage.
“The break was good for me,” she says. “It helped me to get back to my senses.
“It was for the best, to rest the body and the mind. I know I have to do something that will better my life. Education is the key. If you are educated, nothing can defeat you.”
Her studies are important to her – like any other student she discusses having to cram her revision in the night before her exams. But athletics remains her passion.
“I could never give up athletics,” she says.
“Running is what I will always do. Even if, maybe, the authorities could have stopped me from running in 2009, they could not have stopped me in the fields.
“I would have carried on with my running, it doesn’t matter. When I run I feel free, my mind is free.”
Verster has been a calming influence. He describes her as a dedicated athlete, one who is never late for training sessions, one who mentors the youngest and inspires the veterans.
“She is fantastic, really one of the most down-to-earth people you can imagine,” he says.
“It’s a blessing having her in our group. She is so nice, so friendly with everybody, always a smile. That fits with our philosophy.”
Verster knows what it takes to create a champion. And Semenya believes she is already feeling the benefits of his expertise.
“Jean is a very funny, very easy guy. He understands me as a person,” she says. “I like the chemistry, the combination is good. I am looking forward to the future, I think we will go far.”
Olympic dream
Those around Semenya are quietly optimistic about her form. Injury free, that grace, that familiar power have returned. As has her South African 800m title.
We witness her win her race at the SA Open without needing to approach her imperious best.
“Coming back from a 24-month setback is hard,” she says.
“We don’t want to rush things, we’re going to use the small meets as a step forward. The main focus now is the World Student Games.
“We’re not going to worry too much about the World Championships. We want to enjoy what we’re doing. The times will come.”
Semenya’s personal best of one minute 55:45 seconds, run in winning that infamous 2009 world title, remains the high watermark in her career.
At the London Olympics she took silver with a late sprint to the line that saw her pass six athletes in the final 50m.
It was suggested she might be scared of winning gold and the attention that might bring.
“How can you be scared? I want to be a winner,” she tells me.
“I am a dreamer. And what I dream of is to become Olympic champion, world champion, world record holder – I can’t stop running because of people.
“If you have a problem with it, you have to come straight to me and tell me. I cannot stop because people say ‘no, she looks like a man, this and that.’ It is their problem. Not mine.”
Taking on the world
Having escaped her in London, the Olympic gold medal remains at the forefront of Semenya’s mind.
“If I win the Olympics, a gold medal, I’ll say I have accomplished my dream,” she says.
The subject of the world – which stands at 1:53.28, run by Jarmila Kratochvilova in 1983 – also comes up a number of times. It is a mark that is firmly in Semenya sights with the Rio Olympics a year away.
“I will attempt to break the world record. It depends if the body allows me to go for it. But next year I will be 25/26. And there is a good chance to do that,” she adds.
She spends the afternoon in the gym at the university, working alongside her training partners in a facility that has been converted from changing rooms and toilets.
The effort is obvious, as is the focus. There are jokes and high fives aplenty.
As we walk across to the playing fields she says: “It is not about what people think of you, it is about proving them wrong. Do you understand?
“It is about doing what you are best at. I am a runner, what I do best, is running. It is that simple.”
And run she will. The World Championships in Beijing in August may come too soon for Semenya. But if she can stay injury free, she will take some stopping in Rio.
As she walks away, she turns back and says she may move into discus or shot put towards the end of her career. Then she says she would consider the marathon.
With a snort, a laugh and a wave, she is gone. That broad smile beaming.
South Africa does not expect anything from Semenya. She belongs to them, she is and always will be a heroine. The world, however, watches with fascination.
The story of this brave, brilliant athlete, whose very being was questioned so publicly, is one that still captures the imagination.
What is clear, however, is Semenya is no longer running from her past. Standing tall, feeling strong. Caster Semenya is back.