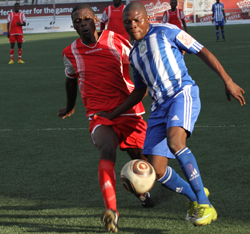 THE MUCH-AWAITED 2014 Castle Lager Premier Soccer League finally kicks off this weekend with defending champions Dynamos facing a potential banana skin against giant killers How Mine at Barbourfields Stadium on Sunday.

But it is Dynamos, fresh from another Caf Champions League early exit who will be the team to watch against a How Mine that beat them home and away last season.

Dynamos lost 1-0 at Luveve in a league match before they were knocked out of the Mbada Diamonds Cup by the same scoreline at Rufaro.

The Harare giants have had a better pre-season, beating Highlanders 2-0 in the Bob90 Super Cup and reaching the final of the Independence Trophy last weekend after defeating City 4-2 on penalties.

Dynamos will miss the injured duo of Masimba Mambare and Clive Kawinga while Patson Jaure is also out for the next six games due to suspension for physically attacking a referee last season.

Coach Callisto Pasuwa is aware of the task at hand.

“It’s going to be a tough match, but we need a good start to the season. We have always been slow starters, but we want to do better this season.”

How Mine coach Philani Ncube said they are looking to continue with their momentum from last season.

“We are not looking at last season but the new season and it will be good for us to start off with a bang and continue from where we left off.”

Last season’s runners Highlanders have been worse off in the pre-season losing four of the six matches they played and failing to score in open play in three of the games.

That is cause for concern for Bosso considering that even coach Kelvin Kaindu was only expected in Bulawayo on Thursday night ahead of the season opener against Chapungu at Ascot Stadium in Gweru.

Harare City travel to Chicken Inn in Bulawayo in what promises to be a thriller of a match as the municipal side is aiming to build on their third place finish last season.

FC Platinum, who finished fourth are at Moses Chunga’s Chiredzi FC, also aiming to be the season’s early pacesetters.