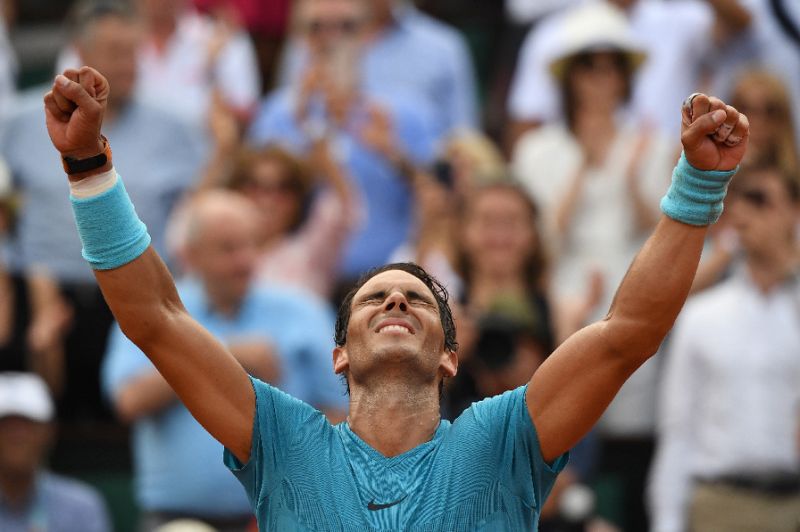 WHEN Rafael Nadal broke down in tears on the Roland Garros podium on Sunday as 15,000 people, plus a smattering of Hollywood heavyweights, stood and honoured his staggering 11th French Open triumph, it was enough to make his desperate rivals weep.

The 32-year-old Spaniard had wrapped up his 17th major, taken his career earnings beyond the $100 million mark and extended his record in Paris to 86 wins and just two defeats.

It also intensified the headache facing tennis’ highly-rated but woefully under-performing next generation.

How do you solve a problem like Nadal? Or Roger Federer or Novak Djokovic and Andy Murray for that matter?

Since Nadal won his first major at Roland Garros in 2005, the ‘Big Four’ have claimed 48 of the past 53 Grand Slam titles.

Stan Wawrinka, it should not be forgotten, also has three Slams although his name is usually an absentee when it comes to such number-crunching.

Nadal’s victory on Sunday meant that the last seven Slams have been shared between players who are 30 and over.

Such is their dominance that former world number one Marat Safin, a two-time major winner, told reporters at the French Open that he would not be surprised to see Nadal and Federer “play until they are 40”.

Nadal has not put a time limit on how much longer he intends to keep playing, no doubt wary of the ravages of his injury-hit career which have forced him to sit out nine Slams to rest either his knees or wrists.

“I am just trying to keep enjoying, and I am going to keep playing until my body resists, and my happiness is still high playing tennis.

“When that changes, that will be a time to do another thing — I am not worried about this.”

Those who should be worried are the likes of world number three Alexander Zverev, who again flattered to deceive in Paris.

The 21-year-old made the quarter-finals of a Slam for the first time having arrived at Roland Garros with titles in Munich and Madrid and a runners-up spot to Nadal in Rome.

The German, however, struggled through three successive five-set matches before being trounced by Dominic Thiem.

“I think everybody can stop talking about it now.”

Zverev’s record at the majors remains mixed — he was knocked out in the third round at the Australian Open in January and second round at the 2017 US Open.

Thiem, who is 24, showed flashes of resistance in the final before crumbling to a straight sets defeat to Nadal in what was his first title match at the majors.

“It’s a big goal for me to play soon another Slam finals,” said the Austrian, the only man to have defeated Nadal on clay in the last two years.

“Of course it’s going to be easier because it’s not going to be the first time anymore. Then hopefully I can do it better than today.”

Outside of Paris, where he also reached the semi-finals in 2016 and 2017, Thiem has not progressed past the fourth round at any of the other three Slams.

Australia’s Rosewall presented the trophy to the Spaniard, 50 years after he won the title in Paris.

“I’m just glad I’m not playing today,” said Rosewall in a nod to the raw power of Nadal.