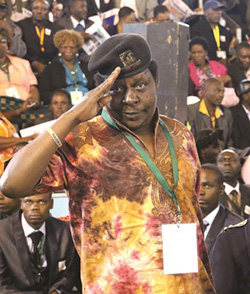 ORDINARY Zimbabweans from across the political divide have raised concern over the non-conferment of National Hero status on the late musician and war veteran, Dickson Chingaira, popularly known as Cde Chinx.
Cde Chinx, was declared Liberation War Hero on Tuesday by the ruling Zanu PF party after days of speculation over his status.
There had been a growing chorus for the award-winning musician to be declared a National Hero for his role during and after the liberation struggle, which he joined on 1975.
In separate interviews with NewZimbabwe.com, people from all walks of life said the liberation war hero status was not befitting for Cde Chinx’s contribution to the liberation of the country.
“He was far more deserving than some people who are lying at the national shrine today’; he deserves better,” said Artwell Guyo of Harare.
His sentiments were echoed by Oswald Kunhe, who said the musician must have clashed with the powers that be in Zanu PF.

Kunhe suggested that Chinx might have been snubbed because of a song he penned, titled Dzorerai Zvamakatora, which he said could have riled some Zanu PF chefs.
“One thing is, you look at the traits. When Border Gezi was made minister, he had been working very hard to push the Zanu PF agenda. So, Zanu PF shows you whether you are wanted or not by giving you a position,” he said.
“Remember that Chinx did not hold any influential position either in the party, government or in the war veterans’ association and that tells you to them he was a nonentity.”
Another resident who spoke on condition of anonymity concurred, saying the late musician must have crossed the path of senior party officials.
“He clearly deserved to go to the hill (national heroes’ acre). I think he must have somehow gone offside at some point because even his participation in national events had slumped, even before he fell ill.
“There is something that we are not being told,” he said.
Gweru resident, Conrad Zvinondiramba, said although Cde Chinx fully deserved to be a national hero, his greatest undoing had been that he was never a politburo member, which seemed to be a prerequisite for one to be national hero.Advertisement

“It would have been very unusual for him to be accorded national hero status. Most of the people at that hill were politburo members except for a few like Mama Mafuyana,” he said.
A local journalist who spoke on condition of anonymity said the conferment of hero status by Zanu PF was not important as it was partisan and not consistent.
“It doesn’t matter where you are buried if you are a hero. Chinx maybe declared a liberation hero but that does not change his national status,” he said.
Questions have also been raised over the criteria used to determine hero status for outstanding Zimbabwean.
Opposition political parties and civil society organisations have questioned why a single political party should decide who is or is not a national hero.
They accuse Zanu PF of abusing its control in government to reward its members, most of them un-deserving, while side-lining deserving personalities who dared hold different views from those of the ruling party.