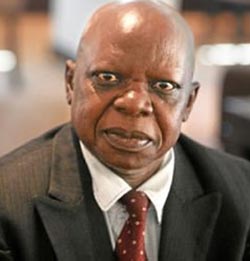 IT is with great sadness to hear of the hero of Zimbabwe, Wilfred Dzino Mhanda’s death. It is also very challenging to differentiate my own intricate emotions and the great work he did in the struggle for the liberation of Zimbabwe. Dzino, as we all knew him, was a great man indeed. He is a tried and tested liberator of the people of Zimbabwe.
I speak of him on behalf of all students who shared his life in Germany at the Technical University of Berlin where he studied his MSc in Food Technologies in the late 1980s. As a comrade as well as a woman, I held him high, a great freedom fighter and potential husband; although the latter did not work.
The ideologies were far apart, him a Zanu and me a Zapu! My youthfulness did not realise this hence my frustration to see him as a replacement of what I already lost in Zanu infighting in Zambia. In his death he should excuse me for these naïve thoughts and intricate emotions I treasured; those emotions in the hope that all will be well with our struggle for the liberation of Zimbabwe and not me.
I will sit down and think who among all of them is a hero if Dzino is not one of them. He fled Rhodesia; he had a promising future in Rhodesia; was a student at the University of Rhodesia; went to Mozambique and Tanzania; got a military training; trained to be one of the finest freedom fighters of our time.
When the hour of freedom came, he was not at the forefront as one of the great liberators. This is always the case with so many liberators who were true to the struggle; when the true moment came false liberators rose in our midst and became the ones to be decorated with liberation flowers; a curse and an irony of our times.
Deep down in his heart Robert Gabriel Mugabe knows that without Dzino he would never have risen to those high echelons of power where he is today – President of the Republic of Zimbabwe. Mugabe hijacked the struggle mercilessly to his favour; many good comrades fell off the line from being true liberators of the struggle to be labelled traitors of the struggle.
Advocate Chitepo is one of them followed by Comrade Tongogara; we do not engage in any gossip about Solomon Mujuru as it’s not worth it anymore. There is no dirty linen to wash as everything is in the public domain. I weep in my heart as I have lost a great friend. I can say this with equal truth and without shame; he knew too well how I adored and doted on him. While we matched in many other aspects of our lives, still our ideologies were far apart. I will bemoan this forever. He will always occupy my little heart as one of the finest people, finest freedom fighters of our time even if it did not work as an emotional pillar.Advertisement

If the authorities do not recognise the contributions he made to liberate Zimbabwe, the great ancestors will do that for him. Where he is today, Ambuya Nehanda, Kaguvi, Mzilikazi ka Matshobana, King Mambo, Bakadzi bano buya bega, Zimbaibge are saluting him and are giving praise as one of our gallant freedom fighters of our time. Sleep well qhawe lamaqhawe, gamba remamwe magamba. We salute the sterling contributions you made in our struggle for independence. We bemoan the suffering you endured in the Mozambique prison brought by your own people and the loneliness you endured in Zimbabwe after the independence of the country you gave up your life to make it free.
Zimbabwe will need to still go through a renewal stage and acknowledge that things did not go well right up to the time of independence; the socialism we dreamt of was not realised, far from it. The independence we have today is not the revolution we fought for; this dog eats another dog revolution was not what we fought for. True liberation is still to come and the liberators may still yet to be born.
After 34 years of independence Zanu got it wrong, very wrong! What you Dzino can do now is to give us the strength from your glorious kingdom to fight the present status quo and get the people of Zimbabwe to hope for a better Zimbabwe. I love you still, even in your death!