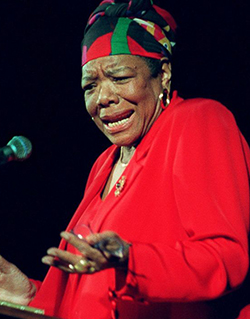 AMERICAN author and poet Maya Angelou, an eloquent commentator on race and gender best known for her groundbreaking autobiography “I Know Why the Caged Bird Sings,” has died at age 86 in North Carolina.
The prolific African-American writer died quietly at her home in Winston-Salem, Angelou’s family said in a statement on Wednesday.
“She was a warrior for equality, tolerance and peace. The family is extremely appreciative of the time we had with her and we know that she is looking down upon us with love,” her family said.
Angelou penned more than 30 books, won numerous awards, and was honored last year by the National Book Awards for her service to the literary community.
Her latest work “Mom & Me & Mom,” about her mother and grandmother and what they taught her, was released last year.
In her last tweet on May 23, Angelou said, “Listen to yourself and in that quietude you might hear the voice of God.”
Literary and entertainment figures, politicians and fans mourned her passing on Wednesday.
Dr. Maya Angelou salutes Madiba