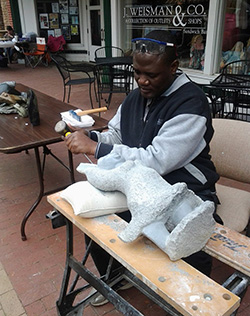 LONDON: Mystery in Stone – works by renowned Zimbabwean sculptor Tawanda Sarireni along with some of the world’s leading Zimbabwean sculptors will be showcased at the illustrious Mall Galleries from the 2nd – 7th of August in London.
The exhibition, titled Out of Africa, will feature a dozen significant pieces that are a culmination of more than two years of the artist’s intensive labour and will reveal the stories, the purpose and the inspiration behind the works.
“It is immensely satisfying to be able to bring this calibre of work to both our local and international guests,” said Saririeni who is also director of the group.
“The latest collection shows that Zimbabwe really does have talent and all the pieces that will be on display will reveal all the intricate stories behind them,” he added.
Out of Africa will feature 35 contemporary pieces that reflect the Shona culture in Zimbabwe from the 1950’s to the present day.
The Shona movement gained prominence in 1950 with artists from Zimbabwe creating striking sculptures in stone, influenced by the international art scene, as well as traditional local themes and practices.
“The works on show encapsulate four themes, including family, joy, sorrow and rite of passage,” Saririeni said.
“The thirty-five extraordinary hand carved stone sculptures that will be on display depict the richness of our Zimbabwean culture, religious beliefs, political hardships and the highs, lows and challenges of everyday life,” he added.
Mystery in Stone has travelled around the world to much acclaim from art collectors and the public, and many of the exquisite hand-carved sculptures have featured in the most celebrated gardens and galleries, including Borde Hill Garden, RHS Garden, Hyde Hall and Oxford Gardens.

The group, established approximately 15 years ago, have mastered the intricacy of interweaving colour, form, texture, essence, belief and emotion with stone.
Having devoted decades of effort undertaking various apprenticeships to develop their talent, they have created some of the most influential and recognised African artwork.
Sarireni has said that exhibit viewers will get to see the diverse work of several different artists and will showcase the distinct and unique styles they all have.Advertisement

“All the artwork on display is bespoke and carved using various stones that include Spring-stone, Cobalt, and Serpentine.
“They are designed to complement any modern décor, suitable for stylish interiors and landscaped gardens,” Sarireni said.
Tawanda stated that there will also be demonstrations of stone carving taking place in the gallery during the exhibition and has encouraged the public to attend and experience the power of sculpture
Well-known for his creative style in which he often provokes the viewer’s social, cultural and political awareness, Tawanda has been a sculptor and curator for two decades.
Mall Galleries is one of central London’s most accessible exhibition spaces and plays host to many of the UK’s leading open art competitions, as well as other temporary exhibitions of contemporary sculpture, photography and the visual arts.
Operated by the Federation of British Artists, a major visual arts charity it was established in 1961. The Federation (FBA) comprises eight of the UK’s leading art societies, specialising in oil, portrait, marine, wildlife, watercolour and pastel.