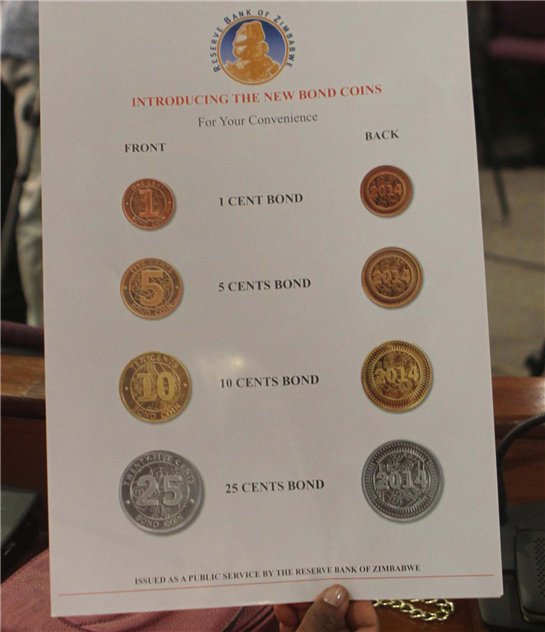 RESERVE Bank of Zimbabwe (RBZ) governor John Mangudya said Thursday the amount of bond coins circulating in the economy will be kept low until there is good will in the country in terms foreign investment inflows and reserves.
Mangudya told an Institute of Chartered Accountancy Zimbabwe Chief Financial Officer breakfast meeting that the bond coins which were introduced this week would not exceed 50 million U.S. dollars over the next three years.
Coins, worth 10 million U.S. dollars, began circulating Thursday as part of central bank efforts to ease the problem of small change which has been experienced since the country adopted multiple currencies in 2009.
The bond coins – constituting two percent of total bank deposits – are in 1c, 5c, 10c and 25c denominations while the 50c coin will be introduced in March next year.
The coins will trade at par with the U.S. dollar which has been the widely circulating currency in the country.
“The coins will not exceed 50 million U.S. dollars. The amount, at one percent of the country’s total liquidity, is currently sufficient for the economy,” Mangudya said.
He said the coins will not increase liquidity but complement the U.S. dollar.
He once again allayed fears of re-introduction of the Zimdollar, saying current economic fundamentals were not right.
Zimbabwe discarded its worthless currency and replaced it with a multiple currency system in 2009.The country is also battling low foreign investment inflows and grossly inadequate reserves.
When he unveiled the bond coins two weeks ago, Mangudya said the central bank will keep the bond coins at below 10 percent of total bank deposits, currently standing at 5.2 billion U.S. dollars.
Under normal circumstances, the proportion of coins to money in circulation in an economy is between 20 to 25 percent.Advertisement