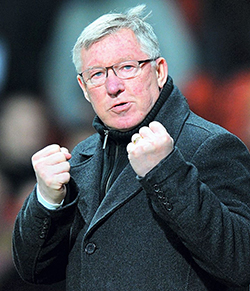 LONDON: Cesc Fabregas has admitted he threw the pizza that struck then Manchester United manager Alex Ferguson in the infamous “Battle of the Buffet” 13 years ago.
Arsenal, for many years locked in a titanic duel for Premier League supremacy with Manchester United, saw their 49-game unbeaten run come to an end at Old Trafford in October 2004 and a clash in the tunnel followed.
Fabregas’s former Arsenal teammate Martin Keown said the pizza was thrown by the Spain playmaker in 2014, but it has taken another three years for an admission from the man himself.
Asked about the incident on Sky’s “A League of Their Own” programme, Fabregas, who now plays for Chelsea, told host James Corden “yes”, before expanding.
The 30-year-old Chelsea midfielder said: “Martin Keown is a liar because I saw him in front of me just, like, punching people. He didn’t see anything.
“All of a sudden, I heard noises and I thought what’s happening? So I go out with my slice of pizza and I saw Sol Campbell, Rio Ferdinand, Martin Keown… everyone pushing each other. (Patrick) Vieira.
“I was like I want to get in but I don’t know how to and I threw… peeew… just threw it.
“Once I saw it was hitting, like, who it was hitting, which I didn’t mean…. I apologise Sir Alex, (I) really didn’t mean to do that.”
Fabregas was asked where the pizza struck Ferguson and indicated it was on the Scot’s cheek.Advertisement