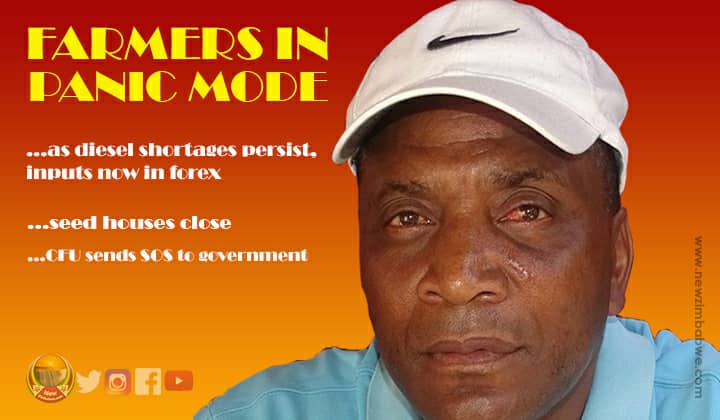 MATEBELELAND province Commercial Farmers Union (CFU) chair, Innocent Winston Baggage has warned the country was heading for a disastrous 2018-19 farming season if government did not put steps to protect farmers from current diesel shortages and the pricing of inputs in foreign currency.

Speaking in an interview with NewZimbabwe.com, Baggage also said the closure of some seed houses was among the dreaded factors that could squeeze most farmers out of business.

“Farmers are facing a draught year as well as diesel shortages,” he said.

“Farmers are trying to get to the fields as soon as possible but there is no diesel. Some seed houses have also closed. How are farmers going to get out of this trauma?”

Since government’s recent announcement of a raft of austerity measures in attempts to reverse decades of economic ruin, there has been a sudden goods scarcity with locals clearing shops of products on demand within moments of their delivery.

Shops with enough stocks are now demanding payment in US dollars in attempts to protect themselves from the pricing instability.

Zimbabwean farmers are paid in local currency and mostly through bank transfers when they sell their produce.

In his comments, Baggage said hard pressed farmers were now at a loss on how they could navigate the rough terrain as they seek to both remain in business while also feeding the nation.

“The impact is too much,” said Baggage.

“What is sad is that the powers that be are not coming to the party. As CFU provincial leadership, we have taken a stance to tackle government over this issue. We need to get this sorted out.”

He said the union was planning to meet Lands Minister Perence Shiri and raise their concerns.

“You remember during the Ian Smith government, the Minister of Agriculture had meetings with the President every month while the President would regularly meet with the farmers union and discuss strategies with him. This is why Commercial Farmers Union was strong,” he said.

The farmers union boss also expressed concern there were some unscrupulous dealers now approaching rural farmers to buy their cattle using bond notes and mobile money transfers while they go on to resell the beef in US dollars.

“I was in Lupane a few days ago. Farmers are selling their beats for as low as $500 bond notes while a kg of the same meat will be sold for as much as $17 per kg.

“People are asking what is going on. We need some sanity to prevail,” said Baggage.

As if these were not enough problems for farmers, the country’s farming season faces with another threat of EI Nino which is feared could severely reduce yields in the 2008-19 farming season.