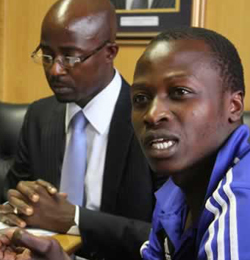 ZIMBABWE and Dynamos midfielder Devon Chafa, suspended by Fifa this week for using a banned substance, has a mountain to climb in proving his innocence, Zimbabwe national team doctor Nick Munyonga said on Monday.
Chafa tested positive in a drug test for prednisolone and prednisone conducted by FIFA following a World Cup qualifier with Egypt in Harare in June.
His club says he may have ingested the banned substance with medication he was taking for an injury to his jaw, suffered during a league match with Highlanders.
But Munyonga says ignorance is not a defence, and players must exercise great caution when taking medication not prescribed by their club medics.
“One thing that a player can do is that when they go to their doctors and they are being prescribed medicine, they have to question if the prescription does not contain prohibited substances,” said Munyonga, who is accredited to the World Anti-Doping Agency.
“The doctors have to verify and check. When a sample has tested positive like in Devon’s case, there is no defence in not knowing because in the WADA code, the strict liability principle is clearly labelled. Athletes and players are told that you violate doping rules intentionally or unintentionally, knowingly or unknowingly.”
FIFA suspended Chafa initially for a period of 30 days to facilitate investigations. During the period, he will be asked to make submissions explaining how the substance got into his body.
Munyonga said: “This suspension covers all types of matches, including domestic, international friendlies, and official. The provisional measure may not be valid for longer than 30 days, according to Article 132, [part 1] of the Fifa Disciplinary Code.
“And this period, in the event that the proceedings do not conclude in the 30 days, can only be extended by another period not exceeding another 20 days as covered in Article 132 [part 2] of the FIFA Disciplinary Code.”
Chafa’s ban was communicated to ZIFA on Augsut 30, but the player was in action for Dynamos as they crashed out of the BancABC Sup8r semi-final on Sunday, beaten in a penalty shoot-out by Shabanie.
Former AC Milan striker Marco Borriello was banned for three months by the Italian Football League – and not FIFA – in 2007 after a positive test for prednisolone and prednisone.Advertisement

Borriello, now playing for Roma, later admitted he had taken the substances to treat an STD he had caught from his model girlfriend at the time.