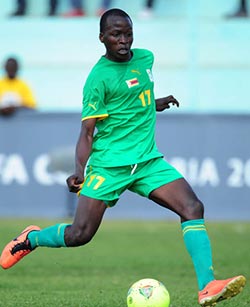 SATURDAY March 1, 2014 marks the end of an agonising six months for Dynamos and Warriors star midfielder Devon Chafa.
He finishes serving a six-month ban for taking a prohibited substance after he failed a doping test which was conducted randomly by Fifa on June 9, 2013 just before a 2014 World Cup match between the Warriors and the Pharaohs of Egypt.
Zimbabwe lost the match 4-2. He became the first player in Zimbabwe to be banned by Fifa for using a prohibited substance.
Chafa said, at the time of the ban, that the banned substance was part of the medication he was taking for a different ailment. He tested positive for prednisone — a substance included on World Anti-Doping Agency’s 2013 Prohibited List.
He looks back and believes, he can still pick up the pieces.
“It was a tough time for me because I missed winning the league title with my team last season and most of all playing in the Orange African Nations Championship (CHAN) finals with the Warriors in South Africa,” Chafa told Cafonline.com this week as he counted down the hours to the end of his ban.
“I know I have missed a lot of chances because my manager was arranging some trials for me, but I can still do something. Friday February 28 is my last day and I can’t wait to get back to playing.
“I am registered for the Champions League and I hope I will be able to play against AS Vita if the coach is happy with my fitness levels. I have been training on my own, but it’s different from training with the rest of the team and playing some matches.
“All I can say is that I am happy to be back and at least the ban was six months and not two years.”

Before the ban, he was the leading candidate for the 2013 Soccer Star of the Year award, which was eventually won by teammate Tawanda Muparati.
Coach Callisto Pasuwa says the return of Chafa will strengthen his team but is not sure when he will finally return in the blue and white colours of Dynamos.
“He will only start training on Monday and maybe by Wednesday or Thursday, we will be leaving for the DRC, so I can’t say when he will be able to play because there a lot of things to consider especially his fitness. We won’t rush him, but I can say, I am happy that he is back and the team will be stronger,” Pasuwa said.Advertisement

Dynamos play DRC champions AS Vita in the Orange Champions League first round, first leg match at the National Sports Stadium at the weekend, hoping to take a big lead for next weekend’s return leg.
“We are playing at home so we should be offensive so that we can get a comfortable win going into the second leg. But we also need to be focussed and disciplined at the back because they can come and surprise us. We should not concede,” said Pasuwa.
Chafa’s manager Gibson Mahachi believes the player can still play in Europe.
“We were working on something for him when the ban came up, but he can still go. He has to work between now and July and prove himself because opportunities are always there,” Mahachi said.
It is understood a team in Turkey was interested in his services. His peers who starred in Zimbabwe’s fairy tale run in the CHAN finals attracted a lot of interested and goalkeeper George Chigova has already signed for SuperSport United while Simba Sithole also joined Ajax Cape Town in South Africa.