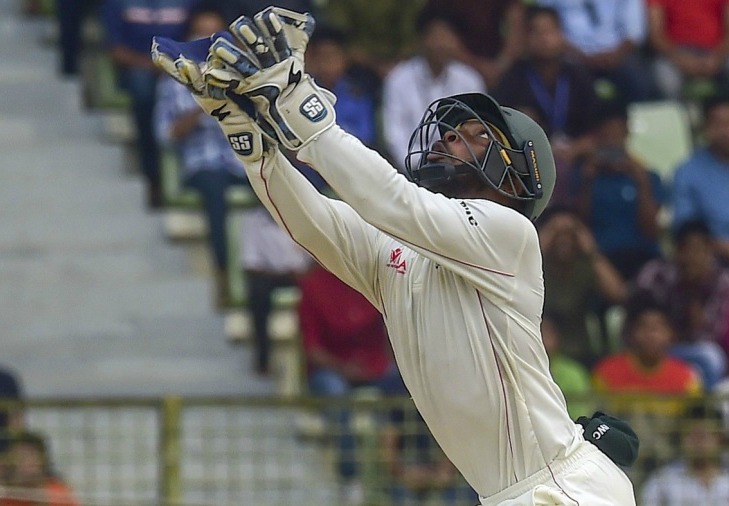 WICKETKEEPER batsman Regis Chakabva and stand-in captain Peter Moor led Zimbabwe held their nerve with a fighting partnership in a nervy rain-affected chase as they beat United Arab Emirates by six wickets in the second ODI at the Harare Sports Club on Friday.

The duo shared an unbeaten 93-run stand off just 76 balls for the fifth wicket as bad light stopped play after 32 overs at which point the hosts were ahead by 4 runs via the Duckworth-Lewis method.

The victory gave Zimbabwe an unassailable 2-0 lead ahead of the remaining two matches at the same venue on Sunday and Tuesday.

In scenes reminiscent of last year’s ICC World Cup qualifier which the hosts shockingly lost to miss out on the global showpiece, the game saw two rain breaks, one right after toss and a long break after 29 overs in UAE’s innings, forcing the officials to reduce the game to 35 overs per side.

Earlier, Zimbabwe had won the toss and sent in UAE to bat before a brilliant bowling spell by bowler Kyle Jarvis, who removed Ashfaq Ahmed, Rohan Mustafa, Muhammad Usman for single digit scores to make it 12/3 in 6.5 overs.

However, Ghulam Shabber and Shaiman Anwar led the fight back with a crucial 131-run stand for the fourth wicket. The former recorded his fourth ODI fifty, while the latter brought up his 11th in the process.

The touring UAE lost 6 wickets for 26 runs post the rain break in their bid to accelerate the scoring.

Jarvis ended with brilliant bowling figures of four for 17 while Donald Tiripano was equally impressive, with his late breakthroughs helping him claim figures of three for 34 as UAE were restricted to 169 for nine after 35 overs.

The visitors’ total was however adjusted by DLS method and Zimbabwe were told to get 210 for victory.

Chakabva’s unbeaten 78 formed the backbone of Zimbabwe’s run chase, continuing his decent run after his promising 38 in the first ODI. The rest of the Zimbabwe top order batsmen Solomon Mire (14), Craig Ervine (13), Sean Williams (17) and Sikandar Raza (11) got starts without being able to build on, and at 92/4 after 19.2 overs, UAE appeared to be favourites.

However, captain Moor came to the rescue his quickfire 45 off 33-balls featuring three sixes to be named the man of the match.

After 32 overs, Zimbabwe required 25 from 18 balls, and bad light brought a premature end to proceedings, allowing for Zimbabwe to go 2-0 up in the series.

The teams square off in the third ODI on Sunday.