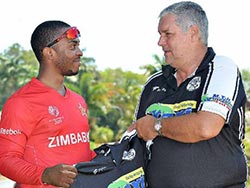 IT’S a great time for cricket in Australia, and Regis Chakabva can’t wait to get amongst it.
The Zimbabwean international arrived in Mackay last week and had his first training session with his new club, Magpies, at the weekend.
Chakabva has represented Zimbabwe in all three forms of the game, and has arrived in Australia in time for the first round of the Mackay T20 season this weekend.
He said he was in good form after scoring 240 first- class runs in his last outing in his home country a few weeks ago, which saw him at the crease for over nine hours.
“That’s my highest first-class score to date, so it was pretty special,” he said.
“I would say I’m in good form, but cricket is cricket – you might come off 240 one day and get a duck the next.
“But I’m feeling pretty confident; it’s something that gives you a bit of confidence to get some runs.”
Chakabva, a wicket keeper and top-order batsman, said he hadn’t played a great deal of T20, but was anxious to get to the crease.
He wasn’t concerned about making the adjustment from Test cricket to the shorter form of the game.
“It’s obviously exciting,” he said. “It’s totally opposite to Test cricket, not in terms of excitement, but just in terms of the dynamic of the game.
“It will be good to free the arms a bit after coming off four-day cricket now; it’s a bit of a change, but it shouldn’t be too difficult a test.
“I like the cut shot, freeing my arms on the off side a little bit, so that’s one of my favourite shots in T20.”
Chakabva first travelled to Australia for a national team camp in 2008, and said he had been hanging out for an opportunity to return.
He said he was attracted to the strong cricket culture in Australia, and was keen to learn from the experience, but said progressing to a higher level of cricket in Australia was out of the question for the time being.
“Not at the moment; I’m still looking forward to playing more international cricket for Zimbabwe,” he said.
“But I’m looking at it for my own development. I don’t think, at whatever stage you play, you stop learning.
“The responsibilities that I have here are probably the biggest learning points for me.
“I realise being an overseas player you’re expected to perform, so that’s a challenge which I’m looking forward to taking on.”Advertisement