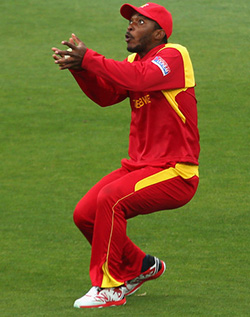 CENTURIES from Regis Chakabva and Malcolm Waller underlined Zimbabwe A’s dominance on the opening day of their four-day fixture against Ireland in Harare.
The hosts, who opted to bat, went into stumps on a commanding 352 for 6, with Waller unbeaten on 112.
Opener Peter Moor was another significant contributor with a 68-ball 52. Moor’s innings helped ride a top-order collapse as the hosts lost three wickets for five runs, that left them reeling at 60 for 3 in the first session.
John Mooney was on a hat-trick when he dismissed dismissed Roy Kia (4) and Vusi Sibanda for a duck in the 21st over but Chakabva survived the hat-trick ball.
Soon after Moor brought up his fifty he was bowled by medium-pacer Craig Young and at 92 for 4, Zimbabwe A were in trouble.
The alliance of Chakabva and Waller changed things around as they put together a 198-run fifth-wicket stand to frustrate Ireland. Chakabva hit nine fours and two sixes in his 104, his tenth first-class hundred, before giving a return catch to Andy McBrine’s offspin.
Waller, who has played nine Tests for Zimbabwe, then brought up his ninth first-class century in captain Godwill Mamhiyo’s company.
Mamhiyo scored in 22 before being dismissed by Young with 7.2 overs left in the day.
But there were no further hiccups for Zimbabwe A as Trevor Garwe negotiated 32 deliveries to finish unbeaten on 13 in Waller’s company.Advertisement