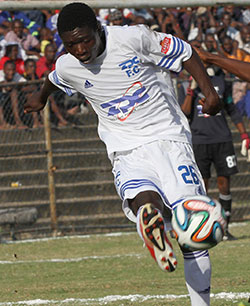 SAUL Chaminuka, the ZPC Kariba coach, has declared the high profile Castle Lager Premier Soccer League match against FC Platinum at Mandava Stadium on Saturday a must win encounter.
ZPC Kariba are in second place with 47 points from 25 matches in the campaign while Dynamos, who face Chapungu on Sunday, lead the standings with 49 points.
Harare giants Caps United, away to Triangle on Saturday, are in third place with 45 points while Highlanders, who host Chicken Inn at Hartsfield Stadium on Sunday, are in fourth place with 39 points.
Chaminuka whose men have already surpassed expectations played down the desire to win the championship but disclosed that a top four finish was realistic.
He said for them to achieve a top four finish which would guarantee them a place in the Mbada Diamonds Cup to be competed for by the top four teams at the end of the term, they have to beat FC Platinum on Saturday.
“Our aim has not been to win the championship but to survive relegation this season,” said Chaminuka.
“If we win the championship it will be a bonus but we can talk of a top four finish and if we talk about the top four, we need to win this one. We drew 0-0 at home last time.
“We were under pressure because we were at home, but this time we are away so they will be under pressure. It’s a must win for us if we are to finish in the top four.”
The ZPC Kariba coach will however be without star player Pride Tafirenyika who was suspended for accumulating three yellow cards against Chiredzi, How Mine and Triangle.
He lashed out at match officials after the match which they won 1-0 against Triangle a week ago for booking Tafirenyika for diving as he shrugged challenge from Triangle defenders .
“I’m very excited about the result, but not so much for the match officiating. I don’t know what match officials are thinking.
“Pride was pulled for over 15 metres by two defenders and then when he finally succumbed, he gets booked. That yellow card means he is now out of our next game against FC Platinum but is that right?
“Maybe it’s because I love my boys too much, but it seems the yellow cards are meant for my players only,” said Chaminuka after the match.
FIXTURES
Friday: How Mine v Chiredzi (Hartsfield)Advertisement