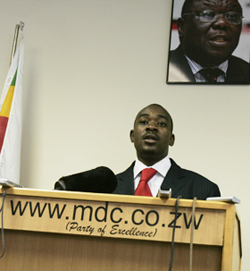 As a country we have a crucial obligation to call our so called leaders into order particularly when they start throwing the name of God everywhere and making barren claims that they were “anointed and appointed” by God. This claim which was made by Nelson Chamisa is nonsense and exposes him as shockingly trivial, especially for one with a growing chain of degrees showing that he is hoarding certificates but dangerously omitting the knowledge.
To imagine that a whole former Minister of Technology, a current Member of Parliament, a National Organising Secretary and a former of student of politics at the University of Zimbabwe can argue that we must ascribe elected officials to “anointing and appointment” by God is putrid gibberish. It is an old-fashioned idea that must be never be allowed in a civilised country where leaders are elected to positions of authority and not a single one of them descended from Mt Kilimanjaro accompanied by lightning and thunder like Mobutu Sese Seko used to do on Congolese TV.
If Chamisa paid attention to his lectures and tutorials he would know one that the famous French philosophers and Stewart Mill’s seminal work On Liberty intelligently criticised this mythical tendency of leaders to proclaim “God and Spirit” when they were challenged on matters of governance it hastened the French revolution.
I am sorry, but as a Zimbabwean I don’t need another messianic fanatic claiming that I was “anointed and appointed” to be a Member of Parliament for Kuwadzana and the National Organising Secretary of the MDC. I chose my leaders at Congress or on the ballot full stop. My liberties have been abused with so much violence perennially by Zanu PF chicanery. I don’t need another deluded zealot whipping people into turmoil based on religion. That sort of thing is the last refuge of a political scoundrel devoid of intellectual staying power.
We must defend our liberties
Zimbabwe has witnessed a generation led by Robert Gabriel Mugabe which has hijacked the liberation struggle and privatised liberty and freedoms we might have gained from the vanquishing of colonialism and Ian Smith’s settler racist minority. We, as Zimbabweans, must defend the rights and liberties enshrined in our Constitution and these include publicly weighing, through intellect and nothing else, whether Robert Mugabe or Morgan Tsvangirayi is capable of leading our nation. This whole idea that the leadership of the MDC was God-delivered to us as Zimbabwe is the highest form of tomfoolery that must be discarded into the dustbins of history. It is shocking as it is sinful to use Biblical comparisons when one is challenged in the arena of ideas, debate and discourse.Advertisement

When Elton Mangoma was being assaulted when did not hear the “Holy Spirit” filled “Deacon”, “Leader” and “Hon” Nelson Chamisa condemning violence and, to me, that is hypocrisy of the highest order. You ignore the scripture when it suits you and start waving the Bible from Genesis to Revelations when the situation is turned – outright deception! The best response when challenged at that level is not to respond by more banalities and one word slogans but to respond with sharper ideas – that is how Western civilisation progressed to where it is right now.
Stopping debate is the intention
The intention of Nelson Chamisa, supported by people like Chalton Hwende, Obert Gutu and Costa Machingauta, is to stop any debate on any issue as long as that is issue is being spoken about by the “anointed and appointed”. I must admit, Nelson, you are full of trickery, full of slippery trickery Nelson. History is full of brilliant men and women who participated in burning citizens on the stack accusing them of heresy and, at the speed with which Nelson Chamisa seems to be afraid of debate; very soon we will hear that the mere mention of the name Morgan Tsvangirai will be punishable by exile or death – Animal Farm once again.
I have no doubt that if Elton Mangoma could be assaulted or ruffled or whatever they want to call it in a political party which was founded on the basis democracy and solidarity anyone in that party can be subjected to what Chamisa’s friends now call “physical counselling”. It is a sad day for democracy, for solidarity, for progress and for democratic transformation when debate is shut down using religious verses and platitudes. The irony is that these days when you read the Herald there is very robust debate about the trajectory of the country, about corruption and incompetence and poor Chalton Hwende, still writing like an infant, is even afforded the space to respond in the Herald. Robust debate is no refuge for the intellectually limited or “weak and inept” you will be slaughtered in the arena of ideas.
The Zimbabwe we want
There is no doubt that the current crisis in Zimbabwe is about leadership and governance. Zimbabwe is on the precipice because Zanu PF is not willing to go through a paradigm shift from a war machinery to a modern democratic party and whilst we thought the MDC was an alternative the more and more it is exposing itself as a power mongering collection of rouble rousing non-thinking activists who fear intellect and would lazily ascribe everything to God.
The African renaissance project is moving ahead and it can only go further through the deliberate unrestrained clash of ideas with the chips falling where they must – no church slogans there even Strive Masiyiwa knows that there is time for everything. Every generation must rubbish some obsolete non-productive philosophies – remember the old technique of thesis, anti-thesis and synthesis; it still works.
When challenged in the public domain – “Leader” Chamisa – next time do some research, take time to think and reason and respond with the ideas that the MDC represents and what it seeks to accomplish. Scampering for cover underneath deliberately perverted Bible verses and pulpit pronouncements just proves how limited your intellectual capacity is. Poor Professor John Makumbe must be turning in his grave because you prominently missed the skills of intellectual inquiry and valiant debate which he was known for.
To think that you were a Minister of ICTs is inconceivable. It is also acutely disconcerting because by insinuation you are also pointing out that Robert Mugabe, Adolf Hitler, Idi Amin, Charles Taylor, Hendrik Verwoerd and the murderous regime of Milton Obote was ‘anointed and appointed’ by God. If this is the God you believe in Hon Chamisa you can certainly keep this one between you, Morgan Tsvangirai and the unlearned cabal bootlicking Tsvangirai. Your boss, Mr Nelson Chamisa and your MDC team, will be subjected to intellectual analysis and this attempt to run for refuge under God’s “anointment and appointment” just shows that you are full of buffoonery of the highest kind.