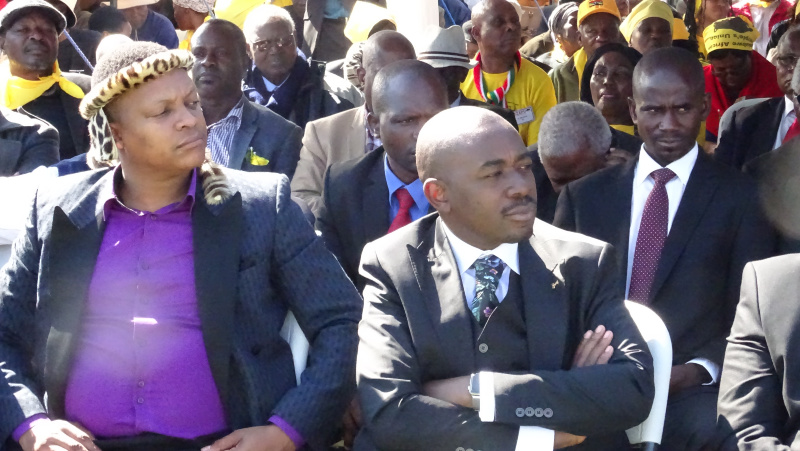 MDC leader Nelson Chamisa was Friday barred by some “overzealous” security from taking up a seat in the VIP section during late national hero Dumiso Dabengwa’s memorial gala at White City Stadium in Bulawayo.

Sources close to Chamisa said President Emmerson Mnangagwa’s protocol department had reserved a seat for the youthful leader at the top table.

But he was ushered into a different tent in which traditional leaders and his (Chamisa) opposition lieutenants, among them MDC vice president Welshman Ncube as well as treasurer general David Coltart were seated.

“Initially, Chamisa was supposed to sit in the VIP section but he was stopped dead in his tracks by senior military and intelligence officials who swarmed him on arrival.

“He was then ushered into a separate tent housing other opposition officials and traditional leaders,” NewZimbabwe.com heard Friday.

MDC spokesperson Jacob Mafume said he was yet to get fuller details of what transpired but had been made aware of the incident. He was quick to call Mnangagwa’s security to order.

“There is need for security personnel to understand that the State does not belong to Zanu PF. They must understand that leaders of the MDC like Mayors and MPs are part of the State. The State cannot be conflated with Zanu PF and it is important that at important occasions, these deserve to be treated with respect and dignity.

“Some people think it is their God given duty to persecute MDC people. It is archaic, backward, foolish and part of the dictatorship hangover this country is suffering from. We have better things to worry about including finding solutions to alleviate the suffering of the people,” Mafume said.

The MDC spokesperson added that Chamisa would never demand to be a “VIP mourner”.

“In any event there is no VIP in death, it’s mourning. Why would one want to be a VIP mourner? It does not make any sense,” said Mafume.

Media reports indicated that the military’s Joint Operations Command took charge of the funeral proceedings early this week in a bid to screen dignitaries and those who will give speeches at the funeral.

Contacted for comment, Chamisa said what was important was that “Dabengwa died on the right side of history”.

“Dabengwa stood for values of Ubuntu and respected human beings not on the basis of age of class but on a people to people level. He was a principled man in a country in which such a stance invites scorn, derision or death.

“This national hero believed in young people and that is why he endorsed us. That endorsement is permanent and irrevocable,” said Chamisa.

“Dabengwa was a hero of two struggles, the liberation and democratic struggles. He understood that political independence without economic independence is hollow and meaningless. Dabengwa understood that. He remains a towering giant in the emancipation of our people and we are ready to carry the torch forward to its logical conclusion.”

Cryptically, Chief Nhlanhlayamangwe Ndiweni who has attracted both excitement and scorn after his antics lately including attending the MDC congress in Gweru, did not attend the memorial.

Angry at continued disruptions in the country’s agricultural sector, Chief Ndiweni has also called for more sanctions on Mnangagwa’s government.

Speaking at the MDC congress, the traditional leader described Mnangagwa as the “Constitutional President” and Chamisa as the “popular president.”