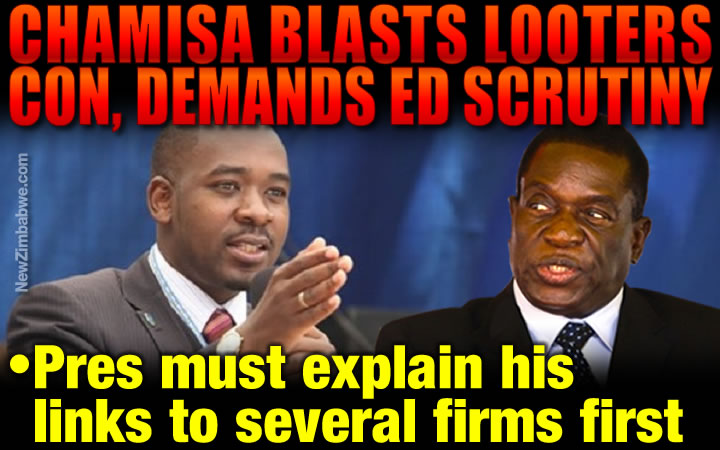 In his address to party supporters at a rally in Murewa, Chamisa seemed to insinuate that Mnangagwa had protected these companies from scrutiny when government produced a list of entities accused of externalization two week ago.

“Mnangagwa recently released a list of companies accused of externalizing foreign currency but these were companies that had acquitted their imports and paid all dues to the government through CD1 forms. Its foolishness of the highest order and please (Tendai) Biti (former Finance Minister) teach these Zanu PF people some bit of law.

“But you should not worry; I have a list of companies with which I know Mnangagwa has links. He must explain those links. Mnangagwa has been saying Zimbabwe is open for business, he must be open to public scrutiny and let us start with those companies,” said Chamisa to rapturous applause.

The Kuwadzana East MP who took control of the MDC-T in controversial circumstances in the wake of founding leader Morgan Tsvangirai’s death in February complained bitterly about what he said was government’s continued abuse of traditional leaders and food aid.

“The traditional leaders told me that if one is MDC they are not given. The irony is that the greater number of people who pay taxes are MDC-T supporters and we find that disturbing,” the MDC Alliance presidential candidate said.

“The food aid and seed are not bought using Zanu PF money. Its taxpayer’s money and should benefit every Zimbabwean as long as they deserve such help.”

Chamisa said this will come to an end by September when “we take over” adding he could demand an early election.

“We are so confident of winning this election that we could call for an early election so we can get it over and done with. Under our government no traditional leader will be allowed to politick. Their job should be to look after our people and their needs in the villages. We will stop that nonsense.

“Mnangagwa will rue Tsvangirai because I am a different kettle of fish. He is running scared,” said Chamisa.

The MDC-T leader added that he was also concerned about reports that government has deployed soldiers in the rural areas ahead of election.

“Our army must be confined to the barracks. My government will make sure the security services are well taken care of not having them going around with torn uniform,” he said.