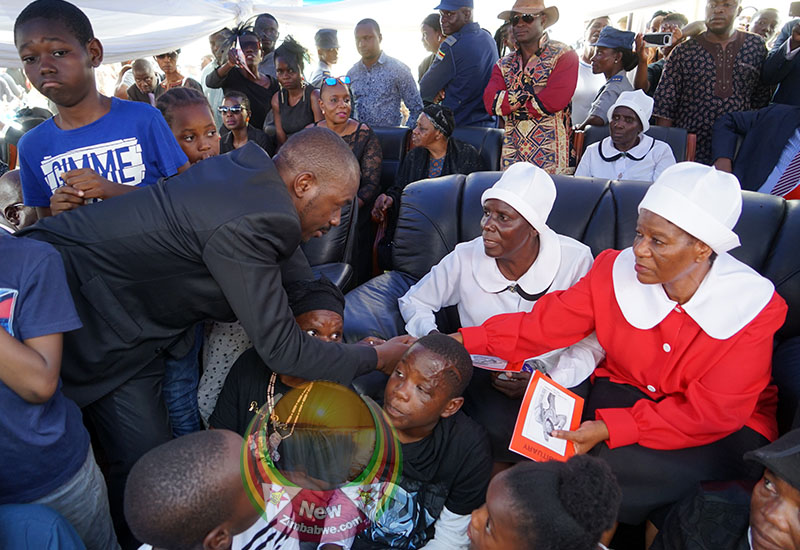 OPPOSITION leader Nelson Chamisa stole the show at the burial of national hero and music legend Oliver Mtukudzi on Sunday, defying apparent attempts by the security services to bar him from the proceedings.

Reflecting his tremendous popularity, tens of thousands Zimbabweans trooped to Tuku’s rural home at Madziwa in Shamva North, Mashonaland Central, many travelling from across the country.

Vehicles stretched more than 5 kilometres from the homestead and those who arrived late had to walk that distance to the homestead as the road was no longer accessible.

Chamisa failed to attend a memorial concert held in honour of Tuku in Harare Saturday after the security services refused him access to the national sports stadium through the VIP entrance.

But he still turned up at the burial accompanied by among other deputy MDC leader Morgen Komichi, Harare mayor Obert Gomba and party legislator Trevor Saruwaka.

Mourners who were filming proceedings on their mobile phones promptly turned their gadgets away from the minister to focus on Chamisa.

The drama heightened as the security services initially refused to allow the MDC leader access to the homestead through the main entrance.

Former deputy prime minister and MDC-T leader Thokozani Khupe was similarly told to use another entrance resulting in her and Chamisa being held up together at the main gate.

The rival opposition leaders did not share a word or even look at each other.

Police formed a human chain at the gate as they insisted that Chamisa proceeds to another gate used by ordinary mourners. He was later allowed through.

Once inside, the entourage did not try to join the other VIP guests, but joined ordinary mourners in the crowds.

However, despite the best efforts of the police officers, Chamisa managed to wriggle his way to the graveside and watched with others as Tuku was being lowered to his final resting place.

After the casket was lowered into the grave, the MDC leader started making his way to his vehicle and was mobbed by hundreds of cheering supporters.

Singing ‘Chamisa, Nero President wedu; hatidi kutongwa nembavha!’, Many abandoned the funeral proceedings and followed Chamisa as he walked the 300-metre distance to where his parked.

Let us not be consumed with pathetic narcism. This weekend is all about Tuku. It’s amoral to be so self-consumed to the extend of trying to overshadow a deceased superstar on his own final journey and swansong. This is not the first time someone has disrespected a funeral.

Meanwhile in a speech read on his behalf by defence minister Muchinguri, President Mnangagwa said; “We should take a leaf from this exemplary son of the soil.

“No matter where we go, what we achieve, let us be like Tuku, never despise or seek to harm our motherland.

“We have one country, one nation, one Zimbabwe. The lyrics of his songs like ‘Hatidi Hondo, Hondo Hatidi’ must be a constant reminder for us to live in peace, love and unity. I therefore challenge us all to always seek to protect our country, Zimbabwe, to fly our national flag high in all we do, love our country and be patriotic towards it.

“He entertained and united millions of people as well as branding and marketing our country as a safe and friendly destination of choice.”