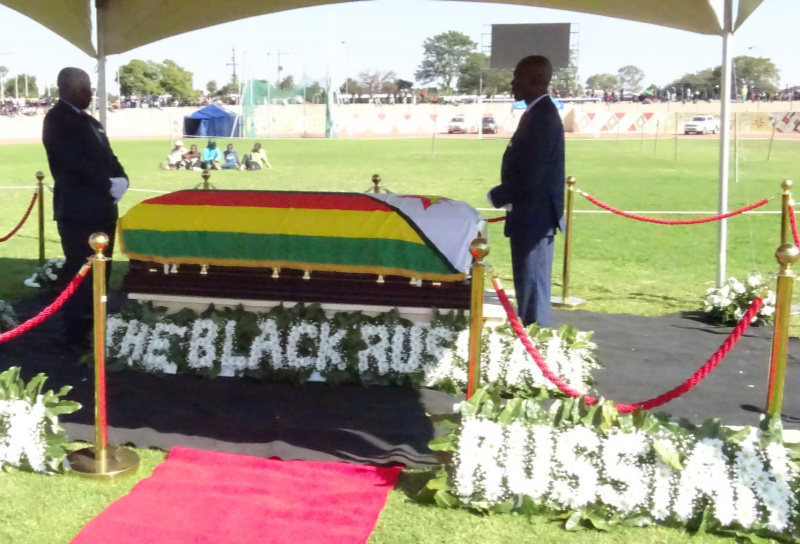 MDC leader Nelson Chamisa, has called on government to apologise for the post-independence atrocities that claimed the lives of more than 20 000 people in the western parts of the country.

Chamisa was speaking at the burial of national hero and liberation war stalwart Dumiso Dabengwa in Ntabazinduna, Matabeleland North Saturday.

Then Prime Minister Robert Mugabe, unleashed a North Korean trained crack military unit known as Fifth Brigade, in a brutal campaign that became known as Gukurahundi under the guise of hunting down a handful of dissidents.

Critics argue the campaign was a sinister plot by Mugabe, to decimate the then opposition Zapu party led by Joshua Nkomo who would later become Vice President after an agreement to cease hostilities in 1987 brought the country’s foremost liberation movements into one party.

Until he was forced out of power, Mugabe refused to apologise let alone allow discussions around the emotive issue.

However, his successor Emmerson Mnangagwa has encouraged debate and allowed for the reburial of victims of the genocide.

Chamisa added that Zimbabweans yearned for unity and a simple apology could go a long way in healing the ethnic rift that continues to fester.

“How do we restore the lives lost? Just an apology and frankness and truth of what happened is a way of honouring those who lost their lives,” said the youthful opposition leader who was given the honour of laying a wreath on Dabengwa’s grave after the burial.

Former Zapu and Zipra cadres have demanded that properties seized from the party during the Gukurahundi campaign should be returned and Chamisa promised this will happen.

“You (Dabengwa) were talking about the files that disappeared,” he said.

It is not the first time that Chamisa has urged Mnangagwa to apologise for the atrocities. Last month, Chamisa said he was ready to help Mnangagwa deliver his government’s apology to the mostly Ndebele speaking victims and survivors of the Gukurahundi genocide.