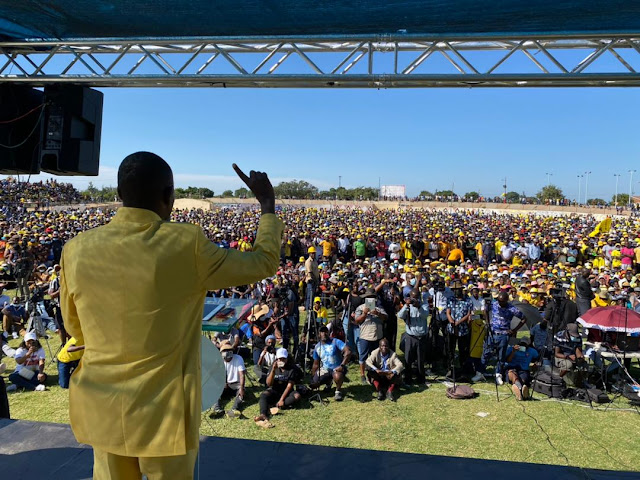 SPELLBINDING Citizens Coalition for Change (CCC) leader Nelson Chamisa claims Zanu PF is plotting to assassinate him ahead of the March 26 by-elections.

He said this while addressing yet another massive crowd at his Bulawayo rally Saturday.

“They are trying every trick in the book, but they do not know one thing that I am like David, I am walking in the anointing that is with me. They will never destroy me,” Chamisa added.

The party has since its formation just a few weeks ago managed to attract huge support judging by attendance at its rallies.

The inaugural Harare rally attracted tens of thousands of supporters and it subsequently held a well-attended rally in Kwekwe which however was rocked by violent clashes instigated by a gang comprising of Zanu PF members, according to police.

Its other rally in Gokwe was thwarted by police, but still thousands of Chamisa’s came out in large numbers to trail him as he strolled the town.

Interestingly, Vice-President Constantino Chiwenga, Zanu PF’s second in command, addressed a much smaller crowd in the same city despite having bussed most of them.

In his address, Chamisa also promised to solve long-standing grievances of marginalisation and economic deprivation in Matabeleland, if his party wins the elections.

“The first thing that we have to do as your government is to make sure that we restore Matabeleland as the industrial capital of our land. I know there is the issue of Gukurahundi. I am the only leader who is going to deal with truth and reconciliation in this country,” he said.

Gukurahundi, which refers to the massacres by the army in Matabeleland and Midlands provinces in the early years of independence, remains unresolved several decades on.

Chamisa said Zanu PF would never destroy him as he claimed there were plots to assassinate him by his rivals.

He asked: “Do you agree that (President Emmerson) Mnangagwa must rest?

Chamisa said he was ready to lead and drive Zimbabwe to prosperity.

“I’m ready. I am ready. In 2023 there is going to be a better government. In 2023 Matabeleland will never be Zanu PF again. I want you to be an ambassador for change,” the CCC leader said.

“Mnangagwa, your dear one Chiwenga was saying he is like Goliath. Goliath I am coming there. David is coming.”

In the Bible, Goliath was an enemy warrior who was defeated by a young shepherd David, with a sling.

“They are shocked and panicking because they thought they had buried us, but they didn’t know that they had planted a seed,’ Chamisa said.

“Everyone is saying we believe in this thing because it’s a citizens’ movement.”

The parliamentary and local government elections are being held to fill vacancies largely created by the recall of elected representatives by Mwonzora and the PDP led by Lucia Matibenga under controversial circumstances.