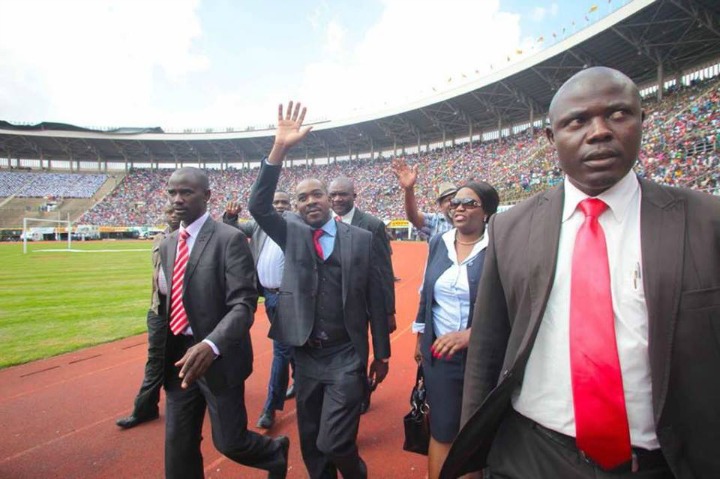 OPPOSITION MDC Alliance leader Nelson Chamisa was Saturday denied entry into the National Sports Stadium where a farewell concert was being held in honour of late music superstar Oliver Mtukudzi.

“The decision by state agents to bar @nelsonchamisa from entering the National Sports Stadium is cowardly and totally unacceptable. Although Hon Zwizwai and myself tried to remonstrate with the government ministers present it was to no avail,” Mwonzora said.

He also confirmed this in a later interview with NewZimbabwe.com.

“It’s shameful and distasteful that the State found it necessary to bar our president from attending a public honour for a national hero.

“We did not get much explanation except some flimsy reason to do with security protocol that they used to deny him entry,” Mwonzora said.

Witnesses to the incident said that Chamisa had arrived with his usual elaborate security in tow and tried to drive through the underground tunnel that leads into the pitch used normally by the State President.

“He arrived with and wanted to drive his car onto the pitch for a grand entrance using the underground tunnel used by the President and other high level officials.

“Security details refused and there was an altercation with Chamisa demanding they give way.

“In fact, he was asked to use the VIP entrance but he refused and sped off,” said one witness adding that there was shouting and shoving with the young opposition leader heavily involved.

“He was not barred. All other dignitaries including ministers were parking their cars outside and walking in. But Chamisa refused and wanted to drive in. Security protocol did not allow this and he walked away. He was not denied entry.

“Chamisa is being a drama queen. A pre-Madonna out to attract attention for the sake of it,” said Mangwana.

“Government has no business barring people from funerals or any functions but protocol has to be followed. We are not a chaotic government.”

Chamisa paid his condolences at Mtukudzi’s family home in Norton early this week and received a rousing welcome from mourners.

Tuku died on Wednesday and was declared a national hero by the Zanu PF led government.

He will be buried at his rural home in Madziwa, Mashonaland Central this Sunday.