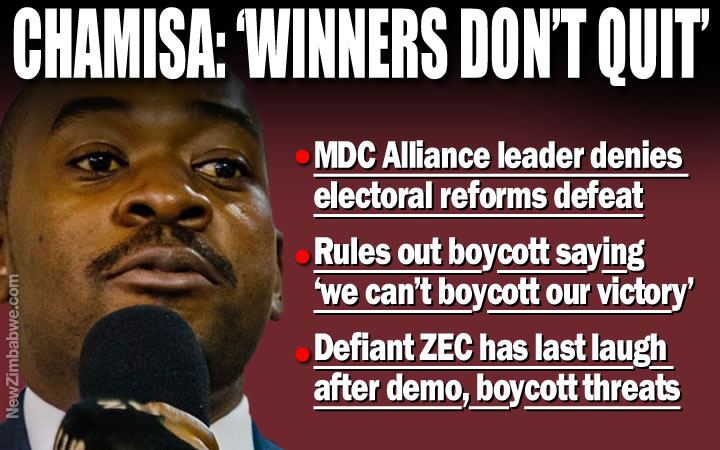 MDC Alliance presidential candidate Nelson Chamisa says he was forced by ordinary Zimbabweans to take part in next week’s election although he would have wanted to “stop the process” and push for reforms.

Chamisa has, for weeks, been agitating for electoral reforms, changes to the ballot paper design, oversight of printing and distribution as well as a voters’ roll with biometric features, warning “there will be no elections” if these conditions were not met.

However, in a dramatic shift, the 40-year-old presidential challenger declared he would not accept any result that did not show him as winner arguing he had done the best campaign.

“I have been engaging the people of Zimbabwe, traditional leaders, war veterans and including in the government service across the country,” Chamisa told a media briefing in Harare Wednesday.

“I have also consulted our structures. I am a democratic leader, the people advised that we take part. We have pushed for reforms.

“My view is that we would not have gone into an election without reforms but the people want their victory. They have asked us to lead them to victory.

“I am a servant of the people, guided by what the people want. I am participating on the basis of their instruction.

We will win anyway

“We are going into the election to protect the people’s vote. ZEC is intransigent but we will defeat them anyway.”

The MDC Alliance candidate who critics argue has the best chance of stopping President Emmerson Mnangagwa’s bid for the top job warned his adversary against any manipulation.

Chamisa was addressing journalists after marathon meeting of his alliance principals as well as the national executive and national council meetings by his faction of the MDC-T which rejected proposals for a boycott.

He moved quickly to pacify, Mnangagwa whom he said had resorted to vote buying as defeat looks eminent.

“Zanu PF is now distributing food aid, seed and fertilisers in a bid to avoid defeat. They are panicking. Mnangagwa is staring defeat. He should not be afraid of the inevitable.

“We want to assure Mnangagwa that he has nothing to be scared of, he must be there to accept defeat with magnanimity.

“And we are there to embrace him as a former President, as a citizen and as a liberation war icon.”

Despite boldly declaring himself winner before a ballot is counted, Chamisa seemed to contradict himself as he claimed that he has put in place mechanisms to stop Mnangagwa and ZEC from rigging.

“We have a ZEC that has lost the trust of the people,” said the MDC-T leader.

“We have a ZEC that has chosen to throw away the whistle and join another team particularly the Mnangagwa team.

“That is why he is not complaining. But we have resolved to defeat both the player and the referee.”

He added; “We want to make sure they will not steal this election.

“We have put in place anti-rigging mechanisms. Contrary to the perception that we are going to boycott, we can’t boycott our mandate.

“We can’t boycott our victory, the clear mandate we have been given by the people of Zimbabwe.

“If anything, it’s a plot by Zanu PF to drive us into despondency and start causing anarchy so that the elections are boycotted.”

Chamisa argued Zec had closed its ears to his party’s complaints about the ballot paper and voters’ roll.

“There has been consistent negation of international standards and the issue of the voters’ roll which impacts on the credibility of the election.

“These issues have set this election on the path to being described as flawed.”