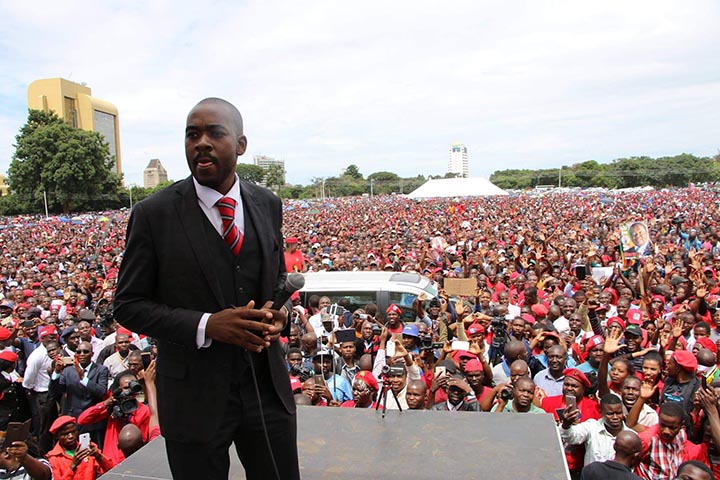 This comes as rivals insisted that a successor founding leader Morgan Tsvangirai can only be elected by a party congress.

Tsvangirai succumbed to colon cancer in South Africa last week and will be buried at his Buhera rural home this Tuesday.

For the avoidance of any doubt the next leader of the MDCT will be elected by the extraordinary Congress. This is so in terms of the MDCT constitution. @Wamagaisa @matigary @FungaiChiposi

However, in his address to thousands of party supporters, a visibly pumped up Chamisa defended his decision to push for a meeting of the national executive and national council that elevated him to power hours after Tsvangirai was pronounced dead.

“We have done what is necessary to make sure there is no leadership vacuum in the party. What we did was perfectly constitutional.

“The next stage is to go back to the national council and make sure we set in motion the internal party processes for our programme of action ahead of elections,” said Chamisa.

He warned that he would not allow “wayward behaviour”.

“We will not allow wayward behaviour. As senior leaders you must be warned that being given positions to lead does not mean this is you party.

“People will remove you. As leader’s you are like caps on a head that can be removed when the owner is fed up. So be careful,” Chamisa said in comments that might have been aimed at rivals in the power scrap rocking the opposition party.

Chamisa seems to have pulled the power rug from under the feet of his rivals Elias Mudzuri and Thokozani Khupe who stood stone-faced as the Kuwadzana East lawmaker enjoyed his time in the sun.

Mwonzora, earlier this week, told local media the MDC-T would go to congress by March 15 this year to fill the void left by Tsvangirai and nominate a presidential candidate ahead of general elections set for July.

Mwonzora argued that the MDC-T owed it to Tsvangirai and MDC-T members to follow procedure adding the meetings that appointed Chamisa especially the national council was not properly constituted.

Khupe has accused Chamisa of uncouth behaviour and an insatiable appetite for power that forced him to forgo cultural norms that respect the dead.

The former deputy prime minister has argued that she is the only one of Tsvangirai’s deputy presidents to have been elected by congress while Chamisa and Mudzuri were appointed by their late boss in July 2016.