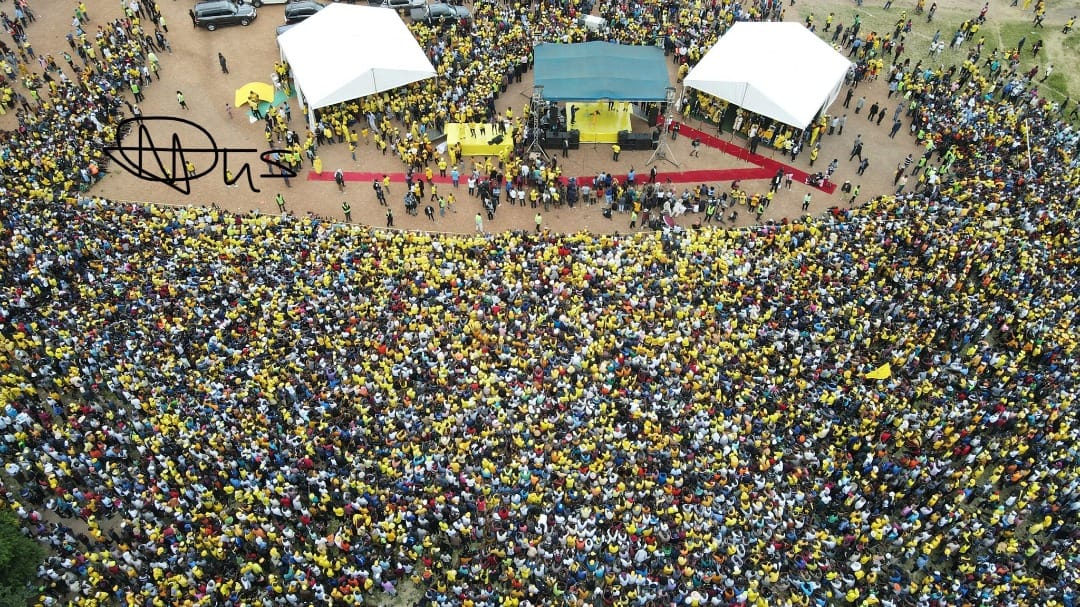 TENS of thousands of Citizens Coalition for Change (CCC) supporters braved the scorching heat of the afternoon Harare sun and a State-stirred hostile political atmosphere to throng the popular Zimbabwe Grounds in Highfield, Harare where party leader Nelson Chamisa addressed his first rally since making a clean break from the MDC brand.

The CCC had been given strict measures to adhere to by police at the rally in a move critics said was calculated at diminishing numbers.

And although police did try their best on the day; mounting roadblocks on major roads leading to the venue, Chamisa still pulled incredibly huge numbers.

Several police officers also pitched up at the venue very early and had to observe proceedings from their parked lorries.

Their presence did little, in anything, to dampen as a sea of yellow flooded the place where bitter nemesis, MDC-T leader Douglas Mwonzora managed just a handful last week when he launched his own campaign.

So packed was the place some had to perch themselves precariously on treetops, goal posts and car roofs to follow proceedings.

The event, too, was given the musical feel to it, as popular dancehall chanters Ricky Fire and Judgement Yard teaming up with Dendera protégé Tryson Chimbetu to serenade the crowd. Ricky Fire, in particular, sent Chamisa into a frenzied dancing craze whose photograph immediately went viral on the social media.

On Twitter nine Zimbabwe Grounds related tags were trending with President Emmerson Mnangagwa’s Marondera rally which was being held at the same time, coming in at 10th.

“Confirmed: Metrics indicate that internet service is degraded for many users in #Zimbabwe; the incident is likely to limit live streaming and access to online content as #YellowSunday opposition rallies are held at Highfields, Harare,” said NetBlocks, an internet observatory organisation.

In announcing the new party, Chamisa promised he will not be rigged in 2023, stating Mnangagwa will this time around claim he was cheated out of office.

Chamisa also slammed the Zimbabwe Electoral Commission (ZEC) for its shambolic management of the voters roll and failure to address how voters’ names were being moved out of their registered constituencies.

The former ICT minister talked of challenges within the civil service, questioning how government could allow police officers and soldiers to travel to and back from work in open trucks, exposing them to all aspects of the weather.

He promised US dollar salaries to teachers and all other government employees the moment he claims victory in the harmonised elections.

“Teachers are not asking for much, they are just asking government to pay it the same amount they got under (late President Robert) Mugabe, under then finance minister Tenadi Biti but they are now being beaten,, threatened, they are now being fired and accused of being sent by Chamisa.

“If people get hungry they have every right to ask for food. Teachers go ahead and get angry, do not be intimidated. The moment we get into governance we will pay you what you were being paid by Mugabe or more because teachers are the backbone of a nation.”

They have been on strike since the start of the first term February 7 and have refused to set foot in a classroom until government concedes to their demands of a US$540 salary.