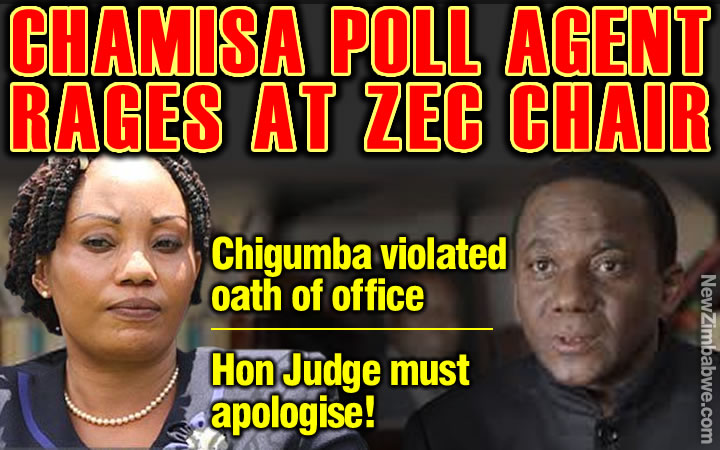 MDC Alliance presidential candidate Nelson Chamisa has demanded that the Zimbabwe Electoral Commission (ZEC) chairperson Priscilla Chigumba apologises to for her “unconstitutional” declarations that elections will go ahead even in the face of apparent irregularities around the voters roll.

In a statement, Chamisa through his chief election agent, Jameson Timba, argues that Chigumba was in violation of her oath of office.

“ZEC has failed to meet its legal and constitutional obligation to provide election materials timely with reference to the voters roll and as such it owes the people of Zimbabwe an apology rather than a mouthful of arrogance by suggesting that if there are any anomalies in the voters roll we should stomach it and raise any complaints after the election and that only an earthquake will stop the election,” an angry Timba wrote.

Despite public indications that stakeholders were getting copies of the voters roll including foreign embassies, the MDC-T claims, ZEC has consistently refused to avail it to the opposition party.

With Chigumba having declared that parties that had queries with the voters roll may only raise complaints after the elections, Timba cited a case heard in the High Court.

“I respectfully disagree with the judge because in my layman’s view the law says the opposite. In Makamure vs Mutongwi 1998(2) ZLR 154 at 169, Devittie J, as he then was, referring to remedies occasioned by a defective voters roll said, ‘Irregularities complained of could and ought to have been raised in the pre-election period. A postponement of the election could have been sought a party does not have to wait until the entire electoral process is completed.’

“In the circumstances, the ZEC Chair’s comments are a cause for concern. Our election must be conducted in terms of the constitution and as such must be grounded on the principles of freeness, fairness and transparency as outlined in the constitution,” Chamisa’s point man said.

According to Timba, ZEC’s delays with the voters roll are inexplicable because the Commission “knew five years ago that there would be an election.”

“Zec has known for five years after the last election that it needed to prepare a new roll, allow people to inspect a provisional roll and raise any objections in it at inspection stage and then provide a roll before the proclamation of the election date and most importantly before the sitting of the nomination court,” he said.

“To-date we do not have that roll which they said will be availed on Thursday. This is unacceptable. On Thursday, I expect to receive a biometric voters roll because that’s what the law demands in addition to receiving the roll in any form I choose including electronic.”

Timba added: “The credibility of any election amongst other things depends on the existence and availability to all players of a credible voter’s roll that is distributed timely. If there are any anomalies in the roll they must be corrected before the election.”

“In addition, outside an earthquake, and the players, the people of Zimbabwe who are tired of these shenanigans can refuse to participate in the said sham election that would have failed to meet the test outlined in our constitution and the enabling electoral act and ZEC regulations irrespective of what ZEC says,” said Timba.