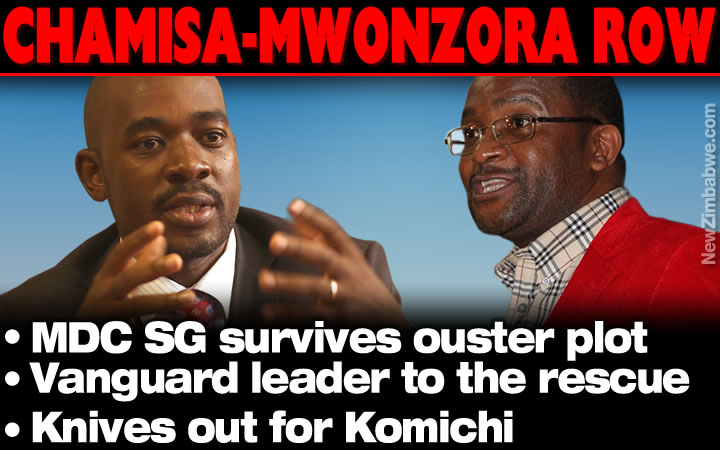 MDC Alliance leader Nelson Chamisa’s bid to eject party adversary Douglas Mwonzora from an emotive national council meeting Wednesday was resisted by MDC hawks in a setback to the former’s ambitions to tighten his grip on the top opposition job.

Sources privy to the stormy developments said Chamisa’s acolytes, among them youth spokesperson Clifford Hlatshwayo, had pushed for a resolution to have the MDC secretary general expelled from the party.

“They wanted him fired for reportedly getting support from war veterans leader Victor Matemadanda.

“They argued it was a sign Mwonzora was working with Zanu PF to destabilise the MDC including during the elections,” said a source.

But they were shocked when Shaky Mukoyi, commander of the shadowy ‘vanguard’ paramilitary group allegedly used by Chamisa to terrorise rivals, jumped to Mwonzora’s defence.

“It was a shocking moment,” said the source.

“Mukoyi said the party needed to move forward and this could not be achieved by sacking leaders.”

“There was momentary chaos. If anything, the signs were there even before the meeting because angry youths milled outside the party headquarters openly declaring their support for Mwonzora,” said the source.

Party spokesperson Thabitha Khumalo however denied there had been any discussion or proposal to have Mwonzora ousted.

“I did not attend but those that were there told me there was no such discussion or a motion to fire anyone,” said Khumalo.

When calm returned, the national council agreed to begin preparations for an elective congress.

“Komichi was accused of getting bribes during the primary elections,” another source said.

“There was a proposal to set up a commission of inquiry into the events leading to the elections which some argued resulted in the poll loss.

“There is likely to be a congress within the next six months and most likely in February 2019.”

But Khumalo said the party’s congress was due October next year.

“Constitutionally, congress is due in October and not earlier than that,” she said.

In the chaotic period following founding party leader Morgan Tsvangirai’s death February this year, Chamisa rejected calls for a snap congress leading to a split with co-vice president at the time Thokozani Khupe who now holds rights to the MDC-T name.

Chamisa is reportedly now planning to reconfigure the pre-election coalition MDC Alliance he cobbled with six other fringe parties into a proper party.

This could pave way for the full return of former secretary generals Tendai Biti and Welshman Ncube who engineered the party’s splits 2005 and 2014.

Chamisa and Mwonzora’s clashes go back to the MDC-T’s 2014 congress when the two locked horns for the secretary general’s position won by the latter.