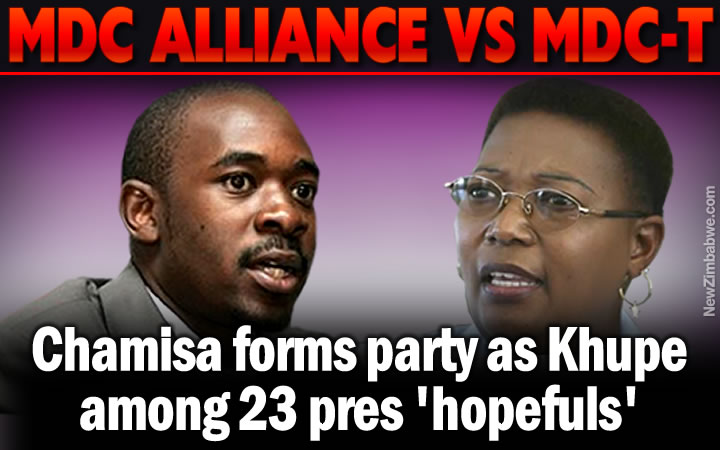 MDC Alliance was Thursday forced to become a fully-fledged political party for Nelson Chamisa to smoothly register as one of the 23 presidential candidates that successfully went through the nomination process.

Chamisa was forced into transforming his re-election arrangement with seven smaller opposition parties into a political party as his fight with Khupe over the use of the MDC-T name and logo dragged on in the courts.

“Yes the MDC Alliance is now a political party and we did this to give direction to our supporters. It’s not about the name but the calibre of the candidate and we have someone who brings fresh ideas to the table.

“Some people have failed to understand him because our horizon as a nation has been limited by the dictatorship,” Mwonzora said.

“We have opened the democratic space and this can be seen by the massive interest in the elections. In a democracy people must be able to freely express themselves and this is what we see. We are ready and we will win this election,” Ziyambi said.

While the nomination process went on with little glitches, Chamisa’s party continued to mourn about the voters roll and reforms threatening unspecified actions including boycotting.

Mwonzora said ZEC’s continued intransigence regarding the voters roll was a cause for great concern to the opposition.

“We still do not have the voter’s roll and it has been difficult to work with the version that is online.

“We are ready for the elections but if the reforms that we have demanded are not implemented boycotting remains a political option available to us. It will, however, be the last resort because we want to give the people an alternative given the pain and suffering they have had to endure over the years,” said Mwonzora.

Asked if his party had any areas it has not been able to access, Mwonzora was upbeat

“We can claim as much support in Mashonaland Central as President Mnangagwa. You should understand that Zanu PF under Mnangagwa is different from Mugabe’s Zanu PF. There are no more strongholds,” he said.