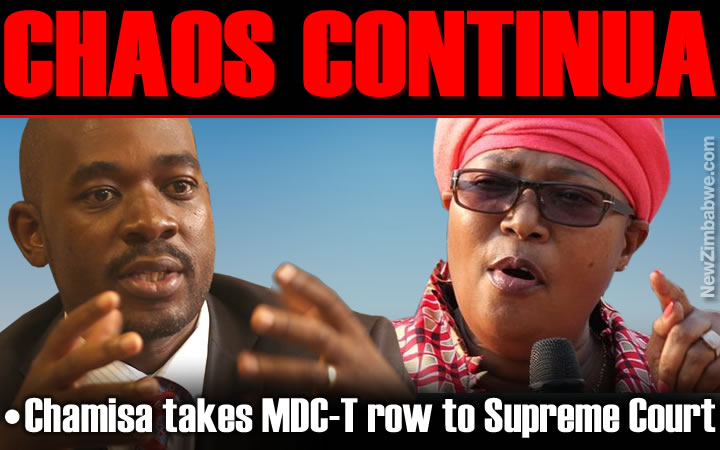 THE MDC-T faction led by Nelson Chamisa has approached the Supreme Court seeking an order to set aside the High Court ruling that Thokozani Khupe faction must continue using the party’s name and logo.

Last week, High Court judge, Justice Francis Bere, ruled that no one was entitled to lay claim to the political party’s name and symbol before the question of leadership was settled.

Chamisa’s faction had approached the court seeking an order to bar Khupe from using the party’s registered trademarks and symbols arguing that they were fired from the MDC-T.

Both Chamisa and Khupe are claiming to be legitimate leaders of the MDC-T following the death of its founding president Morgan Tsvangirai February after a long battle against colon cancer.

Last week, Bere ruled that the two parties should approach an arbitration court for a determination of the matter as it was not clear which MDC-T was legitimate.

In its papers filed at the Supreme Court Monday, the Nelson Chamisa faction is arguing that Bere erred in making pronouncement on substantive issues placed before him, as the parties had no opportunity to advance their arguments on it.

MDC-T further argues that the High Court misdirected itself seriously by finding the matter not urgent which led to failure by the court to consider the applicable principle of time and consequence.

“The applicant further accuses the court for coming with a wrong conclusion premised on the view that the applicant had not instituted proceedings before it and so erred in making a determination without having any regard to the applicant’s constitutive documents and operational statutes,” said the court papers.

“After making incorrect findings the High Court erred in dismissing the case though in its own reasoning the matter could not be dismissed but had to be resolved in fully contested proceedings,” said Chamisa.

The applicant seeks the appeal to succeed with costs, an order setting aside the order of the High Court and that the order be heard on merits before a different judge at Bulawayo High Court.

MDC-T is being represented by Harare lawyer Thabani Mpofu.