Chamisa was speaking at the party’s 20th anniversary celebrations held at Rufaro Stadium in Harare.

Mnangagwa emerged the butt of social media jokes when images of him addressing a near empty, 1 800-seater auditorium went viral on social media.

Exiled former cabinet minister Jonathan Moyo was among prominent individuals who found the funny side of the President’s address.

Not to be lost in the fun was Chamisa, who said the incident showed that everyone was tired of both Mnangagwa’s lies about non-existent reforms in his country and the monotonous dragging of words when presenting speeches.

“We remain committed to making sure change is achieved in this country,” said Chamisa.

“We as MDC have all the support. If you see how Mnangagwa was boycotted at the United Nations, it’s a shame.

“This only shows that Africa is angry but if we want to solve the continent, countries should help us to make sure that political conflicts in Zimbabwe are solved. That is how we can we fix the whole continent.

“The truth is that our economy has crashed because of failed leadership.

“At the recent UN meeting, we saw Mr Mnangagwa addressing thousands of chairs.” 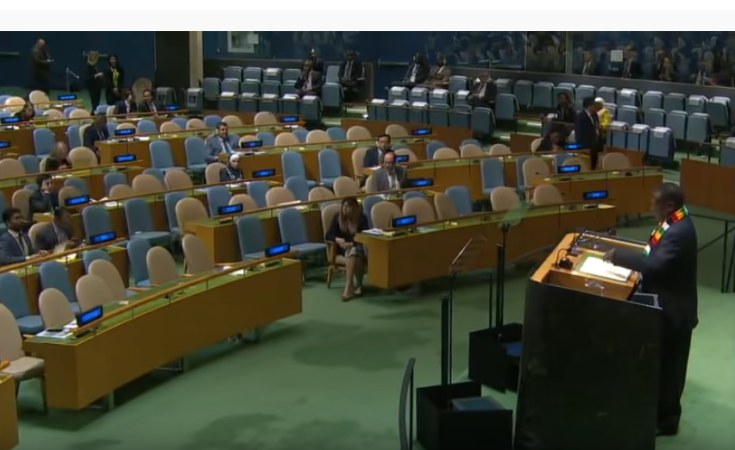 President Mnangagwa during his address of the UN General Assembly

Chamisa was not done yet with Mnangagwa, telling his supporters that the State leader should try to inherit late former President Robert Mugabe’s speech presentation prowess.

“Now we can only ask the people to just listen to whatever he says. Listening is not prohibited but if Mugabe’s legacy is to be shared, we will ask Mugabe’s family to let Mnangagwa inherit Mugabe’s English language expertise now that he is resting.”