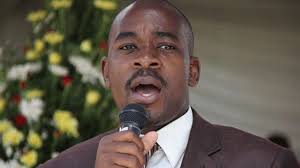 ASPIRING MDC Alliance presidential candidate Nelson Chamisa has spent the better part of the week meeting Western diplomats to “update them on the situation in Zimbabwe”.

Chamisa told New Zimbabwe in an interview that he had taken the chance to drive home the need for the international community’s support for a free, fair and credible poll expected later this year.

“I met the British and Canadian envoys. Very fruitful engagements and we are happy with the feedback we have been getting. The world understands our position and the situation our country is in.

“We need their support in delivering a credible election that respects the will of the Zimbabwean people,” said the MDC-T leader.

With former colonial power Britain and China reportedly having thrown their weight behind Mnangagwa ahead of the elections and other opposition leaders throwing tantrums, Chamisa said he had been assured the Western world remains neutral regarding the political tussle in the country.

“We never got the impression that the British will or have picked a side let alone support Zanu PF. If anything their demands for a free and fair election dovetail with what we want,” he said.

Chamisa is also set to meet US senator Chris Coon Saturday, who is currently in Zimbabwe on a fact finding mission ahead of the crucial polls.