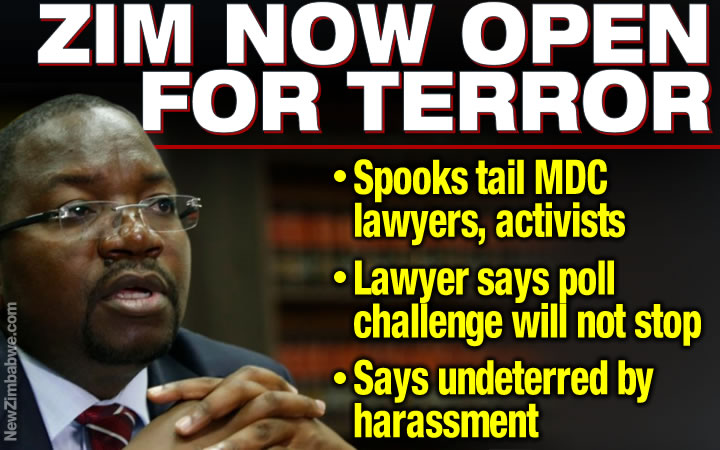 AN MDC Alliance lawyer currently helping the party mount a Constitutional Court challenge against President-elect Emmerson Mnangagwa’s narrow victory says he and his colleagues were being trailed by suspected state agents as the state crackdown on the opposition persists.

“Just two days ago, my car was being followed as well as one of our lawyers working the court challenge,” Mpofu said.

The press briefing was called to update the media on the status of the MDC poll petition.

Mpofu was adamant they will not be dissuaded from doing their job by their assailants.

“We do fear people who fear us,” he quipped.

“We are also not afraid of ensuring that the backbone of our democracy namely the electoral process has given full effect.

“There is something we are prepared to do; if we are to address the Constitutional Court whilst in our prison garb, we are happy to do so.

Zimbabwe’s human rights situation took a plunge a week ago when six civilians were gunned down by the army during wild protests that followed results announcement of the July 30 harmonised elections.

The state has been accused of dragnet arrests on MDC Alliance leaders and activists suspected to be having a hand in the riots with many having since gone into hiding.

Some 27 activists were arrested and later granted bail Tuesday at the Harare magistrates’ court.

Mpofu said during his press briefing the activists were harassed for their alleged participation in the violence.

He said they will not attempt to make formal reports of the abuses to Zimbabwean police saying the country’s law enforcement agents have abandoned their constitutional duties of protecting citizens.

“If we get into problems, we can’t go back to you and say we are in trouble arising out of your abdication.

“We will protect ourselves, we know what the law says. It is an instrument that we can use to good effect, but ultimately we are people; the lives that we have are not ours you don’t just interfere,” he said.

During the media briefing, Chamisa’s spokesperson Nkululeko Sibanda said party activists and employees were now doing their work whilst watching their backs.