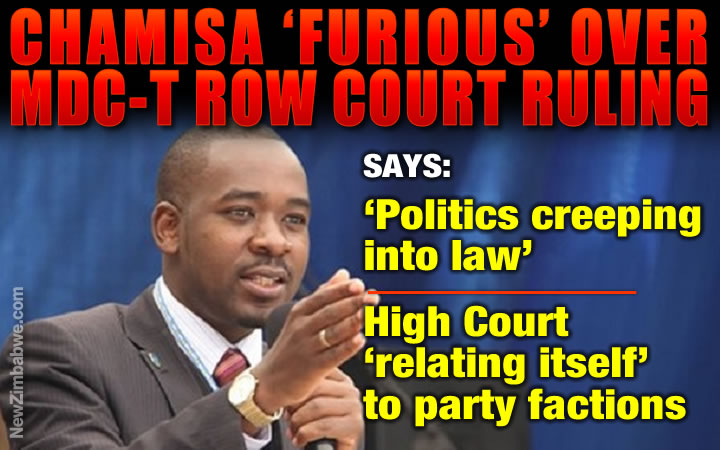 THE MDC-T led by Nelson Chamisa said it is ‘concerned with the creeping of politics into law’ but insisted that its momentum on the ground will not be affected by the recent High Court judgment dismissing its application to bar former Vice President Thokozani Khupe, who now leads a breakaway faction, from using the party name and logo.

The High Court in Bulawayo on Tuesday dismissed with costs an urgent application filed by the Chamisa group seeking to interdict the faction led by Khupe from using the party’s name and logo saying the issue was peripheral.

He said the one who would win the case would automatically get the right to use the party name and logo, adding that currently both Chamisa and Khupe were factional leaders.

But in a statement, Chamisa’s spokesperson, Luke Tamborinyoka, said the party executive had noted with concern the court’s involvement in the factional fights within the party, saying the issue was never before the courts but that of expelled party members who were now abusing its trade mark.

“The National Executive took note of the decision of the High Court. It noted with concern the creeping of politics into law and remained concerned that a whole respectable court can choose to relate itself to the issue of so-called factions which was not even before it,” he said.

Tamborinyoka said the party would not lose focus because of the ruling. He said the party’s executive had resolved in a meeting held Thursday that it would, together with its alliance partners, field candidates in all the 210 constituencies and 1 950 wards notwithstanding the ruling.

He said the party executive had adopted the campaign strategy and agreed on the need to converge with other democratic institutions to fight oppression and government ineptitude.

“The executive noted that the court ruling was not going to affect the party’s momentum on the ground. The party is putting in place robust mechanisms to ensure that its revolutionary thrust will not be undermined or side tracked by needless and unnecessary sideshows,” he said.

The MDC-T led by Chamisa has gone into an alliance with seven other opposition political parties, a decision which led to the fall out with Khupe, who felt the issue of coalescing did not make sense in Matabeleland and insisted on going it alone.