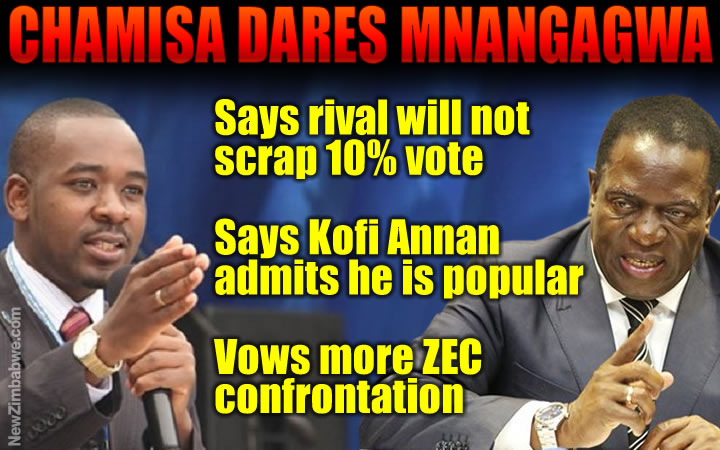 MDC Alliance presidential candidate Nelson Chamisa has replaced his teenage sister with just a handshake offer to President Emmerson Mnangagwa in the event the incumbent scrapped at least 10 percent of the national vote in elections due in a week’s time.

He was addressing a capacity crowd which thronged his Mkoba Stadium rally in Gweru on Sunday.

The country’s leading opposition contender to the top job May this year torched a storm when he sarcastically said he would offer his 18-year-old sister to Mnangagwa if the latter managed to win at least 5 percent of the vote.

He later apologised for his cheeky humour.

In his rally address, Chamisa emphatically declared himself winner of an election in which poll surveys give Mnangagwa a slender lead over his youthful challenger.

“We need modernisation, transformation, prosperity and opportunity and I am going to full fill it for this nation,” he said.

He added, “We had Kofi Annan and Mel Robinson with a group of Elders who told me that in this election, I enjoy massive support in the country.

“They however told me that we must have a nonviolent poll.”

Chamisa said Mnangagwa was deliberately resisting a free and fair poll in the full knowledge he was headed for defeat.

“For the past three months, Zanu PF has effectively been the opposition and we have become the ruling party.

“The very issues which we have been articulating, although they have been opposing, they are now concurring.

“We have been proposing and they have been opposing. We have defined the narrative, we have continued to frame the debate nationally and I can tell you with the direction we are taking, they are now the opposition,” he said.

Chamisa repeated his vows to take the Zimbabwe Electoral Commission (ZEC) head-on if it continued to ignore his demands for a more level playing field.

“A Free and fair elections is not an MDC Alliance issue; it is not a Zanu PF issue, it is an issue which cuts across the political divide. It is a national issue because people want a credible election for peace,” he said.

He warned there would be a total showdown of the electoral process if ZEC failed to play ball.

“We will not participate in the poll; we will not boycott but there will be no election,” he said.

The opposition leader said he had received information that ZEC wanted to use a fake ballot paper for the election.

“We have information from internal intelligence that ZEC wants to use a fake ballot. On the issue of the ballot paper, we are not going back. We are not going to compromise.

“If we don’t agree on the issue, we will have a vigil. We will make sure that everyone is involved. This is a national effort. This is about our future,” he said.

“Your voice must count. Your vote must be protected and we shall protect it.”