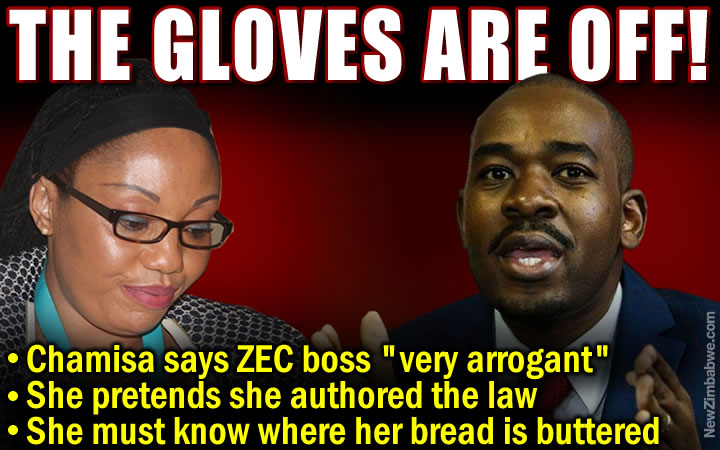 MDC Alliance presidential candidate, Nelson Chamisa has fired a broadside at the Zimbabwe Electoral Commission (ZEC) chair Priscilla Chigumba describing her as “arrogant” for allegedly standing in the way of electoral reforms being demanded by his party.

The MDC Alliance has in the recent past been fiercely pushing for a raft of poll-based reforms with claims the current situation was skewed in favour of the ruling Zanu PF party.

These include more access to ballot printing processes and the storage of the electoral material.

The main opposition also wants the poll management authority to come clean on how it was managing processes of capturing the poll data amid suspicions the information could be manipulated in Zanu PF’s favour.

The MDC wants a cleaner and audited version of the voters’ roll before committing itself to the poll process.

All that has been vehemently resisted by Chigumba who insists some of the opposition’s demands were not covered in the country’s electoral laws.

Chigumba has also said she was not arrogant but was regarded as such because of her being a stickler for the country’s electoral law.

That has elicited strong rebuke from Chamisa who is viewed as a leading opposition contender to the presidency.

“She seems to think that she is the author of law and the alpha and omega of wisdom and knowledge of what must be done. She is not. She must listen. She must know that she is being paid by the taxpayers’ money,” Chamisa said.

“She must do things that satisfy the minimum demands of all parties concerned and not to come and be arrogant.

“Arrogance usually walks hand in hand with ignorance. We do not want her to be one of those unfortunate circumstances in the history of our country.”

Chamisa has vowed the July 30 election shall not proceed if ZEC did not give in to his demands, sentiments which were waived away by the High Court judge who has declared only an earthquake will stop the plebiscite.

Said Chamisa, “It does not matter if she shouts on top of her voice or arrogantly says that there must be an earthquake, it is water under the bridge.

“Whatever she says, the bottom line is that it takes two to tango. Unfortunately, she wants to tango alone, and we will not allow her to do so.”

ZEC commissioner Qhubani Moyo this week blasted some locals political stakeholders who have singled out his boss for “sexiest” abuse because of her job.