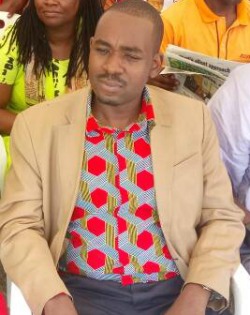 MDC –T Vice President Nelson Chamisa on Monday whipped his party’s Harvest House employees into line telling them that he was in-charge of the movement.
Chamisa is fighting with his co-vice Presidents Thokozani Khupe and Elias Mudzuri to succeed Morgan Tsvangirai who is suffering colon cancer. Tsvangirai is in South Africa receiving treatment.
Mudzuri was, in December, appointed by Tsvangirai to lead the party until his return from South Africa.
Last week, Chamisa was announced by Tsvangirai’s spokesperson, Luke Tamborinyoka, as having taken over the acting presidency from Mudzuri.
Mudzuri resisted the development and said he was still the acting MDC-T President until the return of their leader.
The confusion has, over the past week, caused chaos in the MDC-T with many predicting the collapse of the country’s strongest opposition.
After the Harvest House meeting with party workers on Monday, Chamisa told reporters that he was in full control of the MDC-T.
“I’m overwhelmed by the support from all the party structures and organs in all the provinces,” he announced.
“Also dealing with the noise from the cockpit, we will be meeting as leadership to find each other and iron out any differences. It is just a must,” he said.
Chamisa said Tsvangirai had given him “the charge, vision and direction”.
“We shall lead and we must inspire and wherever you are, join us to make history. We must all make 2018 a historic, generation shaking and game changing year.
“In 1980, we attained our Independence but this 2018 we will regain our lost greatness, robbed pride, snatched freedom and stolen prosperity,” he said.