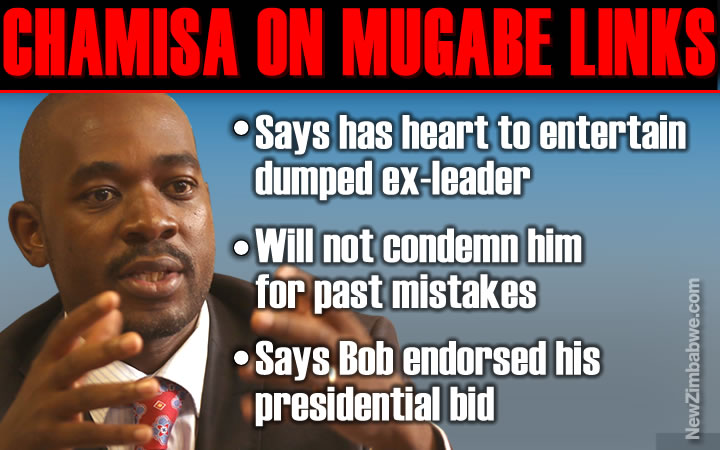 MDC Alliance presidential candidate Nelson Chamisa has revealed his inner affections for ousted State President Robert Mugabe whom he claims to have endorsed his bid to become the country’s next leader.

He took a swipe at President Emmerson Mnangagwa and his Zanu PF for attempts to disassociate themselves with their former boss when in fact they were Mugabe’s lieutenants for decades.

“Mnangagwa has been part of the establishment for 38 years. He was Mugabe’s personal assistant for 56 years. But today, they are claiming Mugabe belongs to Chamisa.

“Do not dump your man on me when you have been with him for so long,” he said to loud cheers from his followers.

Zanu PF, aided by the State media, claims Chamisa has cut deals with the once powerful leader to draft in former First Lady Grace Mugabe as Vice President in an envisaged MDC government.

Chamisa has denied the claims which he has dismissed as an attempt to soil his image by associating him with the unpopular politician.

The one-time ICT Minister under Zimbabwe’s short-lived unity government that was led by Mugabe said he had no problems embracing the forsaken veteran politician in his moment of need.

“Mugabe had his faults. He is human. Everyone errs. My duty is not to start pointing fingers at Mugabe and pointing out his misdeeds. My duty is to correct the mistakes of yesteryear so we can move forward.

Chamisa said Mugabe has already endorsed him as the best of the 23 candidates vying for the country’s top job in Monday’s elections.

He however did not disclose where the former state leader said that.