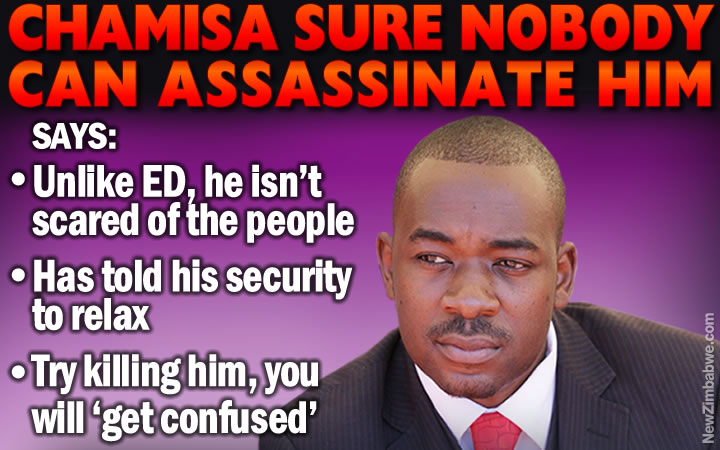 MDC-ALLIANCE candidate Nelson Chamisa says he is so confident that nobody in both the MDC and Zanu PF can dare try to kill him that he has advised his security not to worry much.

Chamisa said it was “not possible” for anyone to kill him and those who would try to do so were bound to “get confused” in the process.

He said this Sunday while addressing Alliance supporters and members at a rally held in Bambazonke Business Centre in Marange.

He said Zanu PF leaders, including President Emmerson Mnangagwa, are always afraid of the people they lead, adding “that is why they always surround themselves with heavy security”.

“ED (Mnangagwa) and his people are afraid of being killed by people he leads that is why they have tight security around them. I told my security not to worry much because no Zanu PF or MDC supporters can kill me. It is s not possible; when that time comes they will get confused. We should not be afraid of people we lead,” said Chamisa after inviting a number of women on to the stage to join him celebrate the Mothers’ Day.

Speaking at the same event, Chamisa said it was sad that despite the discovery of diamonds in Marange, most local health facilities in the area have been reduced into death cages with most operating without adequate drugs and equipment.

“I was saddened by what I witnessed at St Andrews Hospital and Marange clinic. There are no drugs and equipment to treat the sick. To make the matters worse, there is no staff accommodation. There is no privacy at the maternity wards. These facilities have been reduced to death cages,” said Chamisa amid thunderous applause from the crowd.