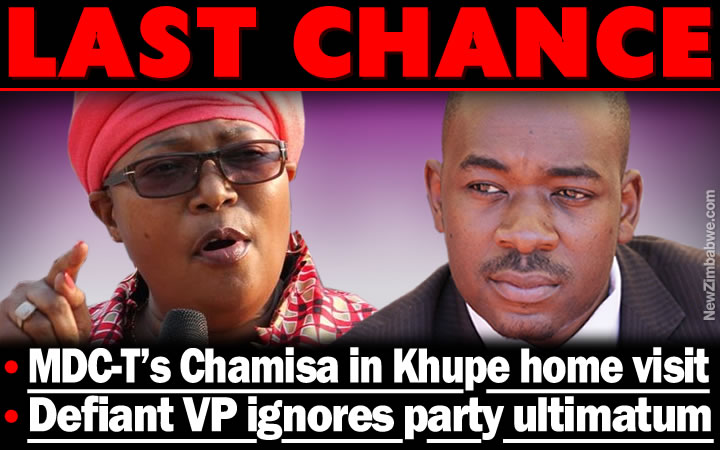 MDC-T president Nelson Chamisa will on Sunday visit estranged deputy Thokozani Khupe at her Bulawayo home in a bid to resolve a bitter leadership wrangle which has been characterised by violent clashes.

Chamisa was addressing thousands of supporters at the MDC Alliance rally held at Dete growth point in Matebeleland North on Saturday.

The party gave Khupe and her allies a seven-day ultimatum to return to the fold, but the vice president appears to have defied the party’s demand with the former deputy prime minister missing Saturday’s rally.

Chamisa said despite the defiant leaders defying the ultimatum which was issued by the party’s National Council, he was still prepared to engage them to resolve the dispute.

“It is important that all our parties should be united,” Chamisa told supporters at Saturday’s rally.

“I am aware that vice president Khupe is not here. She has got her complaints. We are now aware of her complaints. Madam Khupe and other leaders were given a position by the national council but the time for talks has elapsed.

Tsvangirai’s death from colon cancer last month plunged the MDC-T into a leadership crisis with Khupe claiming she is the legitimate successor and questioning the national council decision to elect Chamisa instead.

The row degenerated into violent clashes during Tsvangirai’s funeral and also last weekend at the party’s Bulawayo offices as Khupe and her allies tried to hold a meeting.