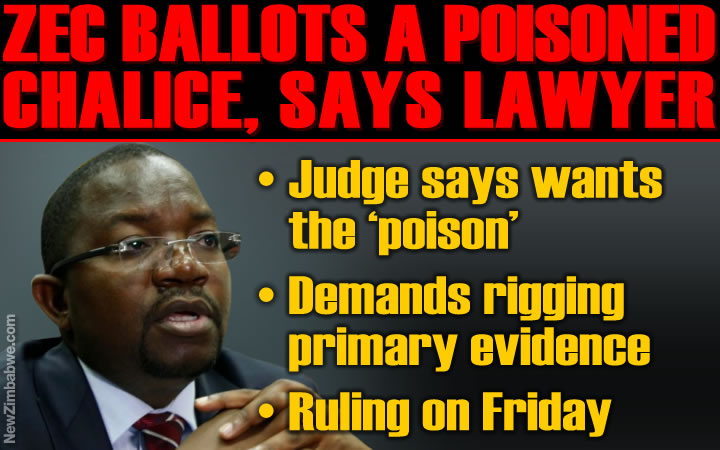 MDC Alliance leader Nelson Chamisa’s lawyer Thabani Mpofu had back on the wall Wednesday when judges hearing the losing presidential candidate’s Constitutional Court petition challenged the Harare lawyer on why his client based his petition on “speculation” as opposed to hard evidence.

This was after Chamisa, through his lawyer, had anchored his case on administrative flaws by the Zimbabwe Electoral Commission while also claiming huge discrepancies in the numbers released as official results by the poll authority was enough evidence the poll was rigged in favour of eventual winner Emmerson Mnangagwa.

Asked if he was basing his arguments on secondary as opposed to primary evidence, Mpofu was adamant that mattered no more as ZEC has twice altered its original results, signalling lack of confidence with its own product.

“Once a declaration is declared, its binding till its recanted,” he said.

“When one accepts that ZEC has not disputed its results, then it cannot be said that the election was not flawed.”

He said this was designed to ensure Mnangagwa got the 31 000 plus votes to avoid a run-off.

Mnangagwa polled 50,8 percent of the national vote compared to Chamisa who got 44,3 percent.

“The election must be set aside,” said Mpofu.

“There were at least 16 polling stations with identical results for both Chamisa and Mnangagwa. It’s like a kid was playing with the numbers.”

The lawyer also argued that up to 40 000 teachers who were part of the polling process were not allowed the opportunity to cast their own ballots.

He added, “More votes were cast even more than those registered; for example in Belvedere, people were allowed to vote despite the fact they were not registered and there is an affidavit confirming that.

“Also, in Norton, over 9 000 people voted when the upper limit was 5 000. The respondent has said this was a slip of the tongue by the results announcer, but no affidavit has been placed before the court regarding that,” he said.

Mpofu was challenged by Chief Justice Luke Malaba to substantiate the claims through hard evidence as opposed to bastardising the ZEC figures to make a case for his client.

“Why did the applicant not seek to have the ballot boxes opened. That would have allayed his fears. It’s like someone is making a declaration but refuses to place it on substantial basis,” said the judge.

The Harare lawyer said it was fatal to return to the ballot boxes which went most probably now contaminated with ZEC’s attempts to rig.

“The primary evidence cannot be related to by the applicant because it’s a poisoned chalice and demonstrates by showing a V11 signed and stamped by ZEC but not populated (there are no figures written down),” he said Mpofu.

Malaba told the lawyer that “we want to drink from the poisoned chalice”, suggesting the court would be placed in a better position to deliver a more credible judgement if Chamisa had brought his own evidence before the courts as opposed to an attempt to analyse ZEC figures.

Judgement is set for this Friday at 2pm.