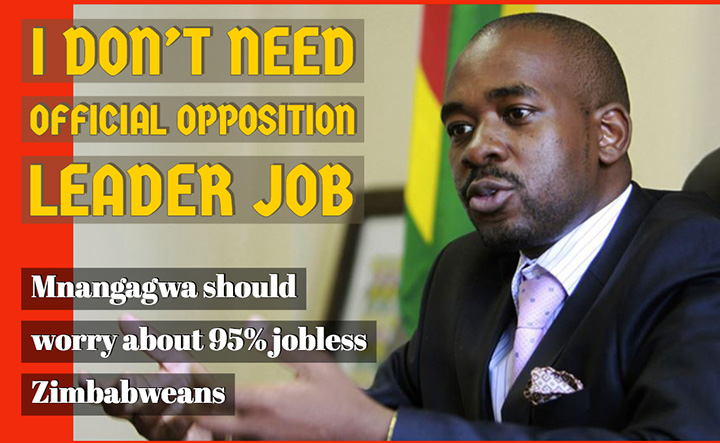 MDC leader Nelson Chamisa has again scoffed at Zanu PF plans to create an official leader of the opposition position, saying he does not need a job.

He insisted that it is the 95% unemployed Zimbabweans that President Emmerson Mnangagwa and his government should concern themselves with.

“(Chamisa) advises anyone who has positions, perks, titles or entitlements to offer them to the 95 percent unemployed Zimbabweans,” the opposition leader’s spokesperson Dr Nkululeko Sibanda said in a statement late Monday.

“Parliament must be put to work creating positions and perks for the 95 percent unemployed and 4 percent underemployed but, hardworking people of Zimbabwe.”

Last month it emerged that Mnangagwa was planning to offer Chamisa the role of official opposition leader in a Westminster-style set-up said to be backed by the British government too.

The Zanu PF leader confirmed the plans in during interviews last Friday in New York where he is attending the United Nations General assembly as well as holding meetings with potential investors.

“We are going to introduce the office of the leader of the opposition in Parliament,” said the Zimbabwean leader.

“Under my administration we are embracing the Commonwealth approach where we recognise the leader of the opposition.”

Mnangagwa has also delayed naming a minister for Harare metropolitan province, with sources suggesting he was considering offering it the MDC as part of efforts to calm an opposition still furious over the disputed July 30 elections.

According Chamisa’s spokesman, there has been no contact between the rivals regarding the proposed official opposition position.

“There is no offer from the illegitimate President Mnangagwa and no dialogue or contact with him,” said Sibanda.

Even so, Zimbabwe’s intractable problems cannot be solved by parceling out positions.

“He (Chamisa) despises the Mafia coloured politics where the gang leader thinks that all problems are solved by the parcelling of perks and positions,” said Dr Sibanda.

“Zimbabwe is bigger than people who believe that they can abuse state coffers to corruptly buy the presidency they lost in an election. This mentality is simply old school for our times, it is unrecognisable in this century.”

He added; “(Chamisa) wants to let all serious statesman and stateswomen know that the crisis in Zimbabwe is not that of positions for politicians.

“In fact, too many politicians have positions they should not have. Zimbabwe has a crisis of governance and legitimacy.”

Despite the Constitutional Court dismissing his Challenge, Chamisa maintains that Mnangagwa did not win the elections.

He accused the Zimbabwe Electoral Commission of rigging the outcome in favour of the Zanu PF leader.

Evidence proving Mnangagwa did not win the elections is available but “the Constitutional Court refused to issue a subpoena for its release”.

“This unlawful act by the Court, in and of itself proves that the server evidence would indeed have made the regime’s claim of victory untenable and unclothe the emperor,” said Dr Sibanda.

“The illegitimate President Mnangagwa, is by objective consideration of the results that remained hidden on the ZEC server, not the winner of the last election.”