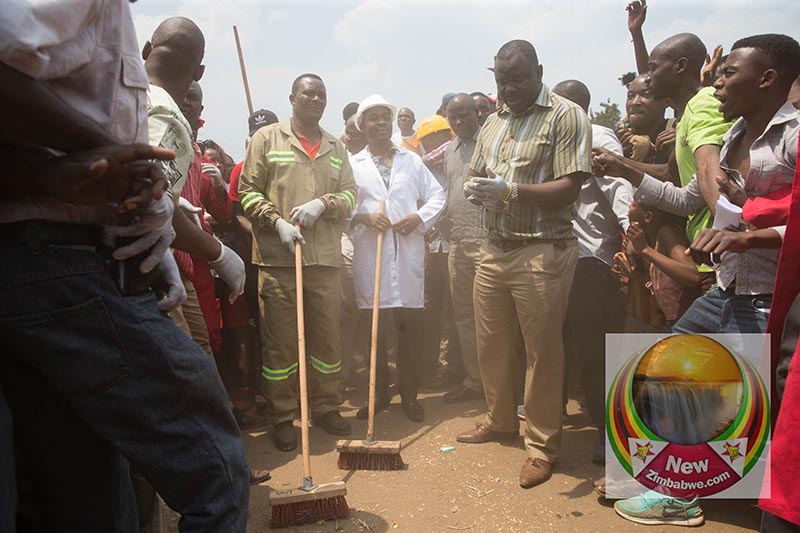 MDC leader Nelson Chamisa has urged calm among his restive followership as he arrived to joyous scenes to lead a party organised filth clean-up campaign in two Harare’s suburbs worse hit by the current cholera scourge.

Since it was declared few weeks ago, the outbreak has claimed nearly 50 people with close to 10 000 also affected.

In his address to party followers, Chamisa said the current cholera disaster was a manifestation of a broader national crisis as he also scorned attempts by President Emmerson Mnangagwa to buy his support through a formal job offer as leader of the country’s biggest opposition.

“Our clean-up campaign is to completely get rid of cholera that has killed many people during this month and in 2008-09,” he told crowds that witnessed the event.

“The real disease affecting Zimbabwe is not cholera,” Chamisa said, adding that the country was already in dire straits with massive levels of unemployment pointing to a leadership crisis that has been with the country for decades.

Ecstatic scenes accompanied the opposition chief’s appearance at Tichagarika Shopping Centre in Glen View 3 as he took to the clean-up exercise with crowds chanting, “Our real President is here, Chamisa! Chamisa! Chamisa!”

The MDC leader could hardly perform his part to clear some garbage as crowds jostled to catch a closer look at him.

They broke into their usual party songs with deafening chants of the favourite “Kwaive kufamba kwaPaurosi achienda Damascus” song accompanying his appearance.

Chamisa then left for Budiriro suburb where crowds also waited for his arrival at a local shopping centre.

Addressing the MDC crowd, Chamisa said the real disease affecting Zimbabwe was a “leadership vacuum” that has seen the Zanu PF led administration expose citizens to opportunistic diseases such as cholera and typhoid through continued failure to provide proper infrastructure.

“Cholera is naughty,” he quipped.

“It thrives wherever there are loopholes. It does not accommodate power hungry leaders.”

Chamisa urged calm and patience among his supporters saying the main opposition was in the process of mapping a way forward on how to respond to the national crisis.

Turning to reports that the Zanu PF led government was planning on constitutional amendments to create an office for the country’s main opposition leader, Chamisa said he did not long for any power that was different from that already reposed on him by the masses through what he insists was victory stolen from him in the July 30 election.

“Do not despair. I do not wait for orders or any appointments from Mnangagwa,” he said.

“For me, he does not exist because you (people) elected me into power. You gave me the authority to be here and this is the power I am following.

“I heard that Mnangagwa wants to offer me a post in Parliament. There must be something wrong with him. Is he well? I was elected to be at State House and I am not afraid of anyone. I have your support.”

Chamisa also condemned the current police operation to remove illegal vendors from the Harare CBD as he also dismissed claims the blitz was triggered by the need to get rid of anything that stood to worsen the cholera menace.

“Let me warn (Harare) council staff, ‘do not be involved in the on-going beatings on residents by the police. Relax’. Jobs will be created and those responsible will be answerable to this inhuman, cruel act being perpetrated on innocent civilians.”

The MDC’s clean-up campaign follows police refusal on two occasions to allow the opposition to hold its 19th anniversary celebrations citing a government ban on all public gatherings in an ostensible attempt to prevent the further spread of cholera.