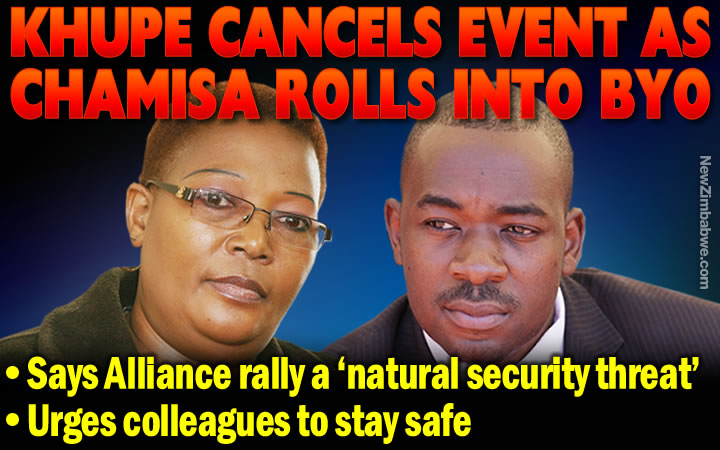 Thokozani Khupe who now leads a break-away faction of the MDC-T following an acrimonious fall-out with new leader Nelson Chamisa has called off her group’s planned extra-ordinary congress after it emerged her rival will be in town.

Chamisa has planned a rally under the banner of the MDC Alliance next weekend forcing Khupe to push the elective indaba forward by two weeks.

In a statement, Khupe, Monday, said she feared her supporters might be exposed to violence from the Chamisa group hence the decision.

“All delegates, stakeholders and invited guests to the MDC-T extra-ordinary congress which had been scheduled for Saturday 7 April 2018 in Bulawayo, are hereby notified that this event has been postponed to 21 April 2018.

“The postponement has been necessitated by the coming to town of the MDC Alliance rally on the same date, whose presence naturally presents a security threat to the smooth running of our program given the violence that took place in the very recent past. We, therefore, urge our party members,” Khupe said.

She added that preparatory congresses in two unnamed provinces would continue to confirm the delegates.

In the aftermath of MDC-T founding president Morgan Tsvangirai’s death in February, Chamisa and Khupe drew swords triggering violent clashes across the country mainly targeted at the former deputy Prime Minister and her supporters.

Violence broke out in Buhera at Tsvangirai’s burial as Khupe was accosted by rogue youths including an attempted torching of the hut in which she and secretary general Douglas Mwonzora as well as organizing secretary Abednico Bhebhe had sought refuge.

Mwonzora buckled under pressure and submitted himself to Chamisa’s leadership while Khupe, Bhebhe and spokesperson Obert Gutu were expelled following a national council resolution.

Chamisa brushed aside calls for a congress and instead moved with speed hours after Tsvangirai’s death was announced.

The Kuwadzana East lawmaker was appointed party vice president along with Warren Park MP Elias Mudzuri in 2016 to make up a trio of deputies as Tsvangirai struggled with cancer of the colon.

After Tsvangirai’s death, Chamisa used everything at his disposal to push his way to the top and since then has consolidated his authority using the MDC-T national council as the vehicle.