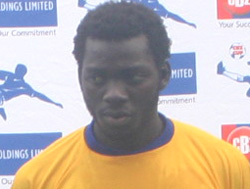 CAPS United began their CAF Champions League Saturday afternoon with a goalless draw against Lesotho side Lioli in Maseru.
CAPS had a setback early in the match when Ngodzo and Nyampfukudza were ruled out due to a discrepancy in their registration documents.
United made a good start but had goalkeeper Edmore Sibanda to thank later in the half as he made two key saves to keep Lioli out.
However, the Green Machine should have taken the lead in the second half when Amidu struck the wood work twice in quick succession.
CAPS United XI:
E.Sibanda,Zvirekwi,Pfumbidzai,Dauda,Jangano,Chafa ,Chitiyo,Bamusi ,Amidu,Khampa,Chungwa
Substitutes:
Muchambo, Musarurwa, Nyampfukudza, Muchenje, Rusike, KambanjeAdvertisement