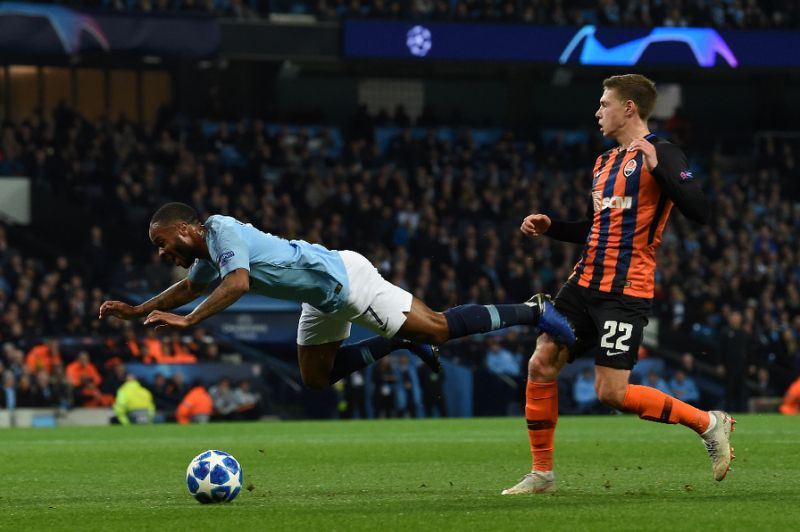 Manchester City needed no help to swat aside Shakhtar Donetsk 6-0 to move to the brink of the Champions League last 16, but got a boost with a farcical penalty award that led to even manager Pep Guardiola to call for the introduction of VAR.

Hungarian referee Viktor Kassai remarkably pointed to the spot when Raheem Sterling tripped himself up as he bore down on goal midway through the first half with City already leading 1-0 through David Silva’s opener.

“It’s not (a penalty),” said Guardiola. “VAR doesn’t exist in UEFA so that is the problem.”

Despite some controversial calls, the use of video referees was largely deemed successful at the World Cup and will be introduced in the Champions League next season.

However, Guardiola, who was sent to the stands for protesting a goal City had wrongly ruled out in a quarter-final elimination to Liverpool last season, called for it to be used in the competition this term.

Sterling also apologised to Kassai after kicking the ground as he attempted to chip the ball goalwards.

“I went to chip the ball and don’t know what happened,” said the England international. “I didn’t feel contact. I scuffed the ball, apologies to the ref.”

Ahead of the game City had been in the news for the wrong reasons in recent days with a series of allegations published by German magazine Der Spiegel claiming the English champions attempted to bypass UEFA’s Financial Fair Play (FFP) regulations.

Whatever storm clouds may be brewing in City’s boardroom, it appears they can do no wrong on the field as they warmed up for the Manchester derby on Sunday by smashing six goals for the second time in four days.

A lack of atmosphere had been blamed for City’s surprising record of three defeats in their previous three Champions League games at home.

The latest of those to Lyon in front of plenty of empty seats at the Etihad in September has now been long forgotten as back-to-back victories over Shakhtar and Hoffenheim have put City in a commanding position at the top of the group.

The fans were in better voice with fewer jeers than usual for the Champions League anthem and they soon had something to cheer when Silva tapped home Mahrez’s cross.

Guardiola apologised to Gabriel Jesus for nominating Mahrez as the penalty taker when the Algerian missed from the spot late on in a 0-0 draw at Liverpool last month.

The Brazilian started up front ahead of Sergio Aguero with one eye on keeping the Argentine fresh for Sunday, but Jesus may now have played himself into contention by more than doubling his tally for the season.

Jesus calmly slotted home the hotly contested spot-kick before Sterling curled in his seventh of the season from the edge of the area three minutes into the second half.

Possibly embarrassed by his earlier award, Kassai resisted a few more claims for a City penalty, but did eventually point to the spot once more when Silva was tripped 18 minutes from time and Jesus fired into the roof of the net.

Mahrez made it five by sneaking a shot in at the near post on his weaker right foot before Jesus’ chip rounded off the scoring in stoppage time.

Guardiola also had the luxury of being able to take off Kyle Walker, Fernandinho and Silva early ahead of United’s visit as City look to go 12 points ahead of their local rivals after just 12 games of the Premier League season.