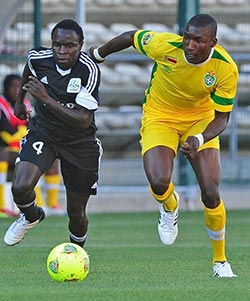 Zimbabwe 0-0 Uganda
FOR the second match in succession Zimbabwe were left frustrated as they played to yet another goalless draw.
The Warriors were held by a stubborn Ugandan side in their Championship of African Nations (CHAN) Group B encounter at the Athlone Stadium on Thursday afternoon.
Zimbabwe had played to a 0-0 draw against Morocco on Sunday afternoon at the same venue and will be worried with their toothless strike force.
The match started off with both sides equally seeing a lot of the ball but lacked creativity and killer instincts in the last third of the field. Ian Gorowa’s men had the better of the exchanges in the first stanza.
The opening goal of the match should have been in the 20th minute when Ali Sadiki was denied at close range by Ugandan keeper Benjamin Ochan. The midfielder’s diving header was well saved by a well-positioned Ochan.
In the 35th minute the Warriors attacked the Cranes defence when Ncube provided a quality cross from the left flank which found the intended target of Sadiki but the midfielder could only direct his header wide of goal with the keeper at his mercy.
With the first drawing to a close, the Southern African nation had their best chance at going 1-0 up when Simba Sithole skilfully forced his way into the Uganda from the right flank, beat defender Richard Kassanga and unexpectedly forced a save from Ochan who dived to his near post to stop a stinging right footed low shot.
Zimbabwe had two glorious chances to sneak ahead just after the hour mark and Mahachi was the architect of both. His mishit cross hit the crossbar and the ball fell onto the path of Nelson Mazivisa followed up with a low shot but again Ochan made a low save to deny the Zimbabweans.
Three minutes later Mahachi set up Sithole with a peach of a cross but the striker headed wide from six-yards out on goal with the keeper at his mercy.
Mahachi was proving to be a thorn to the Ugandan defenders and set up yet another opportunity in the 74th minute with a cross and an unmarked Charles Sibanda headed horribly wide of goal.
The Zimbabweans will certainly be unhappy with this point after dominating their second match in succession but with no maximum points gained while the Cranes will be satisfied with a draw after a win in their opening match of the tournament.Advertisement